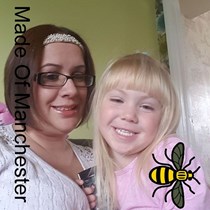 Weʼve raised £2,344 to raise funds for an assistance dog for our daughter who has Epilepsy, Autism, Global Development Delay and is visually impaired

Our daughter, Poppy-Mae, was born at 39 weeks gestation and from as young as 10 weeks was missing her development ‘milestones’. She had scans done and it was found that she has a lack of Myelination on her brain

Myelination is a term in anatomy that is defined as the process of forming a myelin sheath around a nerve to allow nerve impulses to move more quickly. Myelin has an essential role in learning and retaining new practical skills, such as playing a musical instrument. Myelin is a fatty substance that insulates the brain's wiring and is a major constituent of ‘white matter’. It is produced by the brain and spinal cord into early adulthood as it is needed for many developmental processes………….

Poppy has been diagnosed with severe Autism and ‘Global Development Delay’ so the world is a very hard and scary place for her.

The term 'global development delay' is used when a child takes longer to reach certain development milestones than other children their age. This might include learning to walk or talk, movement skills, learning new things and interacting with others socially and emotionally.

Poppy-Mae has these problems as a result of a faulty gene.

If this isn’t already enough, Poppy started having prolonged seizures at 10 months old - her first fit was two and a half hours and her longest to date was six hours. She has 3 types of seizure: absence seizures (petit mal), drop seizures (a brief lapse in muscle tone that are caused by temporary alterations in brain function) and most worryingly Tonic-Clonic seizures (In the tonic phase the body becomes entire rigid, and in the clonic phase there is uncontrolled jerking. Tonic-clonic seizures may or may not be preceded by an aura, and are often followed by headache, confusion, and sleep. Also known as a grand mal seizure). Unfortunately Poppy’s seizures are usually prolonged and life threatening.

Poppy is now nearly six and likes to play in her room or outside in the garden but if she has a fit and we cannot see her it could be extremely dangerous for her - it vital we get help and medication to her ASAP.

Poppy seems to be drug resistant and it looks as though her meds may shorten her seizures but not stop them. Several times now we have now found her on the floor, in the early hours of the morning, having an epileptic fit. Poppy has only had a few seizures she has come out of on her own so she requires 24 hour care. Being alerted to these seizures really could save her life!

Poppy is such a happy and cheeky little girl; she is very determined and strong willed, despite having been through so much in her short life. We would like to make life a little easier for her and get her a dog which is trained to help her; if possible by signalling when she is about to have a fit but will also help her when she is out and about. It will help her stay on paths and stop at roads with her, it will give her something to hold when out and about and change her life by giving her a level of independence she couldn’t otherwise have. This dog will be able to let us know when she needs help and can stay with her & calm her during meltdowns.

Going through a charity who specialise in assistance dogs can take years. Many have closed their waiting lists as their dogs are very sought after.

Therefore we have made the decision to try to raise the funds privately, to get a specially trained dog, from WKD Trained Dogs Ltd.

Any assistance at all that you can give will help towards making Poppy-Mae’s life just that little bit easier. Thank you very much for your contribution.

I'm Poppy mum and have watched my daughter go through so much in her short life,She smile though it all but her body can't keep taking these prolonged seizures. Her seizures are uncommon prolonged and life threatening. Pls help if you can to change our daughter life.