PoultonFC Football Under 13 raised £275 from 10 supporters 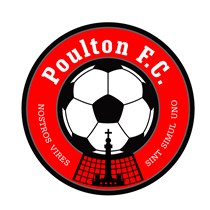 Weʼve raised £275 to raise funds to be able to provide the squad with new kits and training equipment.

Thanks for taking the time to look at our cause.

We’re trying to raise money for our children’s football team which will go towards the kits that they need, training equipment and the day to day costs involved in running a boys’ football team.

We have a fantastic bunch of parents who contribute significantly every month and every time we ask them for that little bit extra, but the costs involved with running our team, especially in the winter, outstrips the subs we collect.

Our boys play in the under 13 squad for PoultonFC in the Poulton and District Primary league, which means training kits, playing kit (home and away), referee fees and more are required.

As we have found out (the hard way), running a football team isn't just about turning up on a Sunday afternoon to play, there's an awful lot of prep that goes on around this. To the boys’ credit, they train 2 nights a week in whatever Mother Nature can throw at us and have never complained once.

As we have now moved over to winter training this is an added cost which stretches our already stretched funds to the max. We have been fortunate enough to have a home match kit, but this is due for replacing at the end of this season, if only the boys would stop growing!!

Our goal is to raise at least £500, This would help towards ensuring that the boys are kitted out with a winter coat which, I’m sure you’ll agree, is much needed when you’re standing on the touchlines during games.

We are a grassroots under13 football squad and we are looking to raise funds for new kits & training equipment. We are currently looking at a cyclethon - where we plan to cycle the distance from Poulton-le-Fylde to the Camp Nou in Barcelona, a grand total of 1175 miles!!