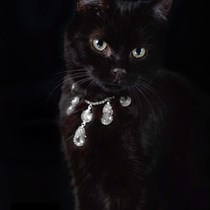 Weʼve raised £568 to help pay for Precious to have her leg removed.

Animals and pets
Funded on Saturday, 14th May 2022

Precious was brought into our care in September 2021 after we received a call from a volunteer to help a colony of cats in Devon left behind by their previous owners, these cats were just used for breeding and then their kittens sold. It wasn’t just cats that had been abandoned 32 horses had been left behind too. They had taken the 15 dogs they used for breeding with them. The conditions when we arrived were shocking and totally heartbreaking. We had to set traps to catch the cats as they had been left to become feral. In total we rescued 13 cats and kittens all in a dreadful state. Precious was one of the easier to catch and we didn’t need to use a trap for her, on inspection we noticed that she was injured and was told by the lady who took it upon herself to ensure these cats were fed, that in the summer of 2020 Precious had been kicked by a horse and her leg broken, this bone broke through her skin, and she was never treated or taken to a vet.

On return to the rescue, we made all the cats comfortable and contacted our vet for them to be seen, Precious was pregnant again, so we were unable to Xray her. The vet advised that the injury was so old that it would be best to Xray her once she had had her kittens and they had been weaned so they could spay her at the same time as her x-rays. Over the next coming weeks, we noticed her tail was also damaged and that part of it seemed dead, when she was spayed sadly, she had to have most of her tail amputated too. Once the x-rays where done the extent of her injuries shocked not just us but our vets too. Unfortunately, the only way to improve Precious’s quality of life means she must lose that damaged leg.

The xrays showed the following injuries:

A nasty break to her left leg, the bone was broken and pushed backwards

Her body has formed a false socket which meant her left leg was a lot shorter than her right.

We are in need of help to fund Precious’s operation as her treatment already has cost us close to £600 and we have also had very poorly, injured cats in and out of our vets over the Christmas period, one of which was Precious’s daughter who took unwell.

All in all the Umberleigh cats as they were known has cost the rescue over £6k.

Missy was another one of the Umberleigh cats that pulled at our hearts, she was extremely heavily pregnant on arrival and within a few days gave birth to 3 kittens but it soon became apparent that she had more and was unable to give birth to them so was rushed to the vets for emergency treatment, she had to have a c-section and had 3 more babies but sadly the one that was stuck in her birth canal had sadly passed away. Missy and her 5 babies returned to the rescue but sadly Missy got into her warm bed and sadly passed away. Her 5 kittens had to be hand reared but sadly they were just too weak and over the next week all passed away.

Mittens was another cat that was heavily pregnant on arrival and the night she went into labor, me and my colleague Melina stayed at the rescue till gone midnight helping her deliver all 6 of her kittens. Mittens was only a baby herself and at 5 days old she pushed one away, which I took over hand rearing and she was a very poorly kitten which meant lots of sleepless nights keeping her alive, the vets didn’t give her much chance of survival but Bree defied the odds and is now a very much loved cat of mine, her 5 siblings also had to be hand reared from 2 weeks old as mittens milk dried up and she wasn’t interested in them at all, the fact all these cats were having kittens as kittens and not having a break between litters took its toll on all of them.

Dizzy and Chloe were 2 cats that had eye issues, Dizzy had damage to one of her eyes and again she wasn’t given and veterinary treatment so once in our care had to have that eye removed, Chloe went to have her surgery and our vet found that due to inbreeding and over breeding Chloe had in fact been born without her eye.

We have since been informed that some of the cats over the years had been in dreadful states and one for example had prolapsed and another was so ill with cat flu he couldn’t open his eyes due to the infection being so bad and again never treated or taken to the vets, the amount of remains we found just showed how neglected these cats and kittens were. In 23 years of working in and owning a cat rescue I have never seen such dreadful appalling living conditions, when we had caught all 13 cats and they were secure in our cars I did another walk through and ended up breaking down in my volunteer’s arms.

The conditions these cats were living in were disgusting and there were dead bodies of cats and kittens within the area they were living. I’ve never seen such neglect and found it soul destroying, I had to move the bodies of these cats and kittens to help find and trap kittens that were hiding. I found bones of kittens from newborn to 4 months old that obviously died and mummified bodies of adult cats. I had the responsibility of picking these bodies up and placing them in a bag so that the RSPCA could take them for evidence for prosecution. Sadly, even with chasing them the RSPCA didn’t turn up or take this case any further. What makes it worse is these people now live in Cornwall and are breeding their dogs still for money, and the poor dogs are not being cared for and are living in poor conditions again. 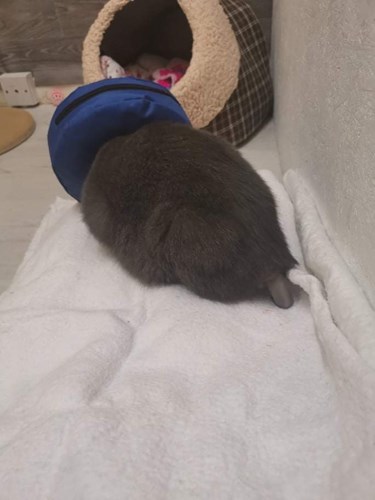 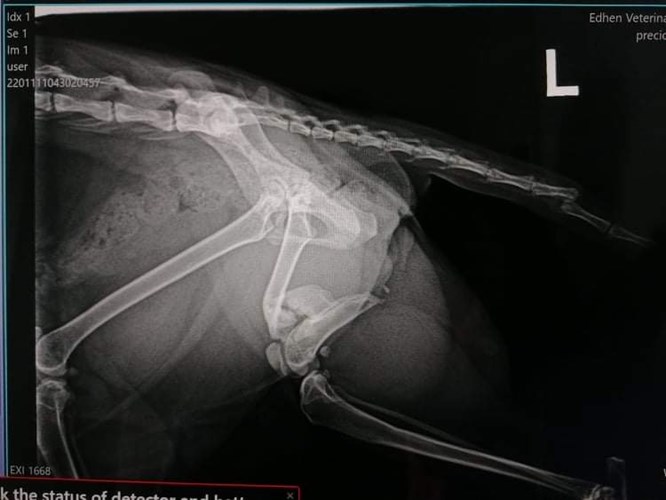 All the other cats and kittens that we saved have been neutered, chipped, vaccinated and rehomed apart from Precious and 2 that were just too feral to be homed so have become residents at the rescue. Once Precious has had her operation, she will be looking for an only cat indoor home only. If your able to help us by donating just a pound we would really appreciate it, we rely on donations to ensure all our cats are given every chance of life.