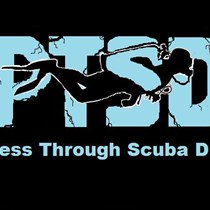 Weʼre raising £9,999 to relieve the symptoms of combat related PTSD in Veterans and serving members of the UK armed forces through scuba diving experiences.

Many of our Veterans and serving soldiers are suffering in silence from PTSD due to the stigma and controversy surrounding mental health issues. Bluntly, men and women have died, are dying and will continue to die if we don’t reach out to help them. We can start making a change now. I’m asking you, for their sake, please help.

There is scientific research, carried out by ‘The Johns Hopkins University’ in the US, showing that scuba diving in WARM, CLEAR WATERS can elevate the body’s serotonin levels, which has been shown to relieve PTSD symptoms. Please read link - Scuba Diving Improves Function of Body, Mind in Vets

Invisible wounds of combat-related PTSD don’t just affect soldiers or veterans but also those around them. It has a ripple effect - It’s not just the wife not just the mum and the dad, there’s children, there’s brothers, there’s sisters, there’s family and there’s friends. They are fighting with all their might to keep these men and women alive. They want the men and women back they once had before PTSD took its hold.

I am the wife of a veteran that suffered from PTSD symptoms for over a decade, who watched her husband get let down time and time again from the support offered by the military. The wife who hid her husband’s symptoms from our family and friends until it got to a point where there was no denying that he needed a different method of help, if he was to win this battle. Thankfully we found a post on a Veteran’s social media page which changed our lives for the better.

In 2019, after just seven days of scuba diving one to one I now have my old husband back. I believe this is down to several factors with the diving and serotonin levels being the primary benefit, but also the bespoke conditions and the military banter from someone who understands what it is to have served, this allows them to open up and talk, which for many people with PTSD, isn’t that easy.

So far you have helped us raise enough funds to send 3 further veterans scuba diving. With each stating these therapeutic scuba diving sessions have positively changed their lives.

Those who serve our country make many sacrifices while defending us, and they deserve our respect, but respect alone is not enough, and warm words alone are not enough. Let’s do more; let’s get them the help they need!

From the bottom of my heart……..THANK YOU!

PTSD is a registered Charity NIC108392. All funds raised are used to provide flights and accommodations with diving instruction and equipment provided free of charge by our trustee Kevin James (MSDT).