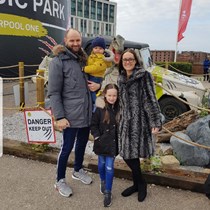 In September 2015 I was studying and taking exams to gain my qualification in work. The exams were intense and difficult, I was feeling really exhausted and suffering from headaches. I went to see my GP as I was feeling really unwell, My GP sent me for my bloods to be taken and a ECG as he said I seemed tachycardic.

Off I went to get my bloods taken, I went to the hospital for an ECG. When my name got called to go in I collapsed and banged the right side of my head on a chair. The A&E DR wanted me to have a CT scan as the head bump I took was quite bad. I was kept in hospital for a few days. After I was discharged from hospital I was called by a consultant he began to inform me of what they had found.

I have an abnormality on the left side of my brain, to which he said they where transferring all my information over to Walton Neurological Hospital. Three days later I was contacted by Walton Neurological team who asked me to go in for an MRI scan. Within 2 weeks I met with Neurosurgeon Mr Jenkinson who gave me the news that the abnormality was a Brain Tumour of what kind or stage they didn't know until they preformed a Crainiotamy, Mr Jenkinson was hopefull they could remove 80% of the brain Tumour but the other 20% was over my motor functions script which would cause a stroke.

November 2015 I went down for surgery in the morning, 2 weeks later I was woken up in ICU, Mr Jenkinson was there with my family to advise me that during my operation he could only remove 5% of the Tumour as it was difficult to navigate. When the surgery team tried to wake me on the same day my body went into a epileptic seizure of status Epilepticus and they could not stop my body seizing so they had to induce me into a Coma.

Over the next 2 weeks they were trying to reduce the sedation I was on and use epilepsy medication to control the seizure but my body would go straight into a status seizure. After 13 days the epilepsy consultants and surgeons found a medication to stabilize my condition, and they were able to wake me up. I had to learn how to walk again face the fact I had right sided body weakness and go through intense physiotherapy. I had a hole in my esophagus from tube changes when I was in the coma so was tube fed for a few days.

I was discharged from hospital 3 and half weeks after being admitted. It took me 3 months to recover from the surgery and make an adjustment to the fact I had severe epilepsy. I had an appointment with my neurosurgeon and oncologists to diagnose the Tumour. They operated and removed 5% of what was diagnosed a grade 2 left frontal lobe astrocytoma. The brain Tumour could never be fully removed and would grow and develop into different stages over time.

Between 2016 and 2017 I suffered from 11 status epilepticus seizures and was placed into 8 induced comas loosing some days and some weeks in hospital. In September 2017 I went for a regular 3 month MRI scan, by October 2017 I was called into see my neurosurgeon who told me that my Tumour had began to grow again and there was two options to consider another crainiotamy or radiotherapy. My neurosurgeon wanted me to decide the next option as he knew that the 1st operation he preformed was not successful and my body went through a lot.

I told my neurosurgeon that I trusted him and I would go through a crainotamy again. 2nd January 2018 I went down for my surgery morning time, 11 hours later I was brought back up from Theatre. Once I was awake and stable Mr Jenkinson came to see me and my family and said he was able to remove 80% of my Tumour. I battled through the recovery and was looking forward to getting back to normality. Looking after my family and being able go to work and finish my exams. Which I managed to do, for a brief period of time.

There was always the severe epilepsy that seemed to land me back in hospital. In late October 2019 I went for my routine MRI scan, Early November I was called back too see my Neurological team and oncologists. I was given the news that my brain Tumour has began to grow again. A small growth the oncologists and Neurological team advised that radiotherapy to stunt the growth for a extended time would be the next step, but I 'am not able to have any further brain surgery due to the location of the remaining Tumour.

The purpose of me asking for you to donate Is to help me carry on living via special treatment in Germany. I Have 2 children called Eva and Jude, they are my life and I draw my strength from them both. I also have a husband to be who is my world and without him I don't think I would be here. No family should have to go through so much suffering especially one so young as us.

What we as a family are asking is for you to donate so we can still be a family together and watch our children grow up. My time is very precious and without the proton beam theraphy treatment I may not have a lot left. Next year I am getting married it would be mine and my families dream for me to be there and be healthy.