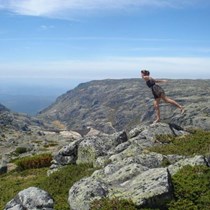 We have set up this page because we know our mum has spent almost every penny she has getting her beautiful Quinta to where it was.

She was ready to begin teaching all things self sufficient on it next year, thus bringing in an income after spending the last 7 years getting it to this point.

She has put her everything into her land, along with the help of many skilled friends to get it to where is it now.

To see her lose so much although amazingly not everything is devastating for us. If we had the money or resources we would fix everything for her in a heartbeat.

Here is mums account - "Two nights ago with the wind from the hurricane, the fires started up again. They came from two directions at the rim of the valleys and completely enclosed us. No way out. So we stayed. As the two fronts came to converge in Benfeita, we barricaded the children in the church while anyone who was able fought the fires in the streets. Several houses in the village burned. The whole of Central Portugal was burning. The bombeiros were stretched impossibly thin, so we fought the fire ourselves alongside the local people. Our two presidentes, incoming and outgoing, were unbelievable - constantly at the front line, back burning where they could, never stopping. We have no power, no phones, no internet, except at the very tops.

At the quinta, I was able to water some areas down before we evacuated and set sprinklers on the yurt. Our exit was blocked by fire so I had to leave the car behind and we left on foot carrying the cats in baskets. The chickens and geese had to fend for themselves. At some hour of the night I sat in the village and watched the wee house burn. It and the geodome greenhouse are gone. The main building and the yurt survived unscathed. The cob bathroom is part burned where the woodstore next to it went up. Amazingly, the geese and chickens are OK and unbelievably the car survived with only slight melting of the rear lights and registration plate. Water lines are burned and electrical wiring melted but the solar equipment survived although some of the panels are toast. The entire landscape is black and smoking. Even after last night's rain, trees roots are still smouldering and the air is still smoky.

Last night we got together in the house of friends who's house and power system survived to charge phones and talk. One long-time resident, the first foreigners here, looked up from contemplating the total loss of everything he has, punched the air with his fist and said "We go on!" For me, that was the defining moment. We go on."