Historical Context of the Project

We intend to raise funds for a commemorative stained-glass window to honour the 100-year relationship between RAF Scampton and Scampton Church. With your support, we intend to celebrate the memory of all squadrons who have served at the base both in peacetime, during the two world wars and the cold war. We also aim for the money raised to go towards working with local schools, forming an art project which will aid in their understanding of the historic events which have taken place and the sacrifices made to allow them to live in a free country.

• Create a commemorative stained-glass window to display in Scampton Church

• Commemorate the Squadrons and staff who have served at RAF Scampton during the last 100 years .

• Teach children the importance of RAF Scampton’s history; developing their understanding of 'Remembrance' and improving their creative talents

Why should I support this project?

As well as raising money for this window, we are creating a stunning piece of artwork to remind the community of those who have selflessly served their country at RAF Scampton.

There are strong historical links between Scampton Church and the RAF, with memorabilia such as the original squadron shields and honour boards from the former Officers' Mess which are now displayed in the Church. It stands as a touching tribute and reminder of the courage and sacrifices that were made, with the stained-glass window a permanent monument to the exceptional service that RAF Scampton has delivered to its community and its country. 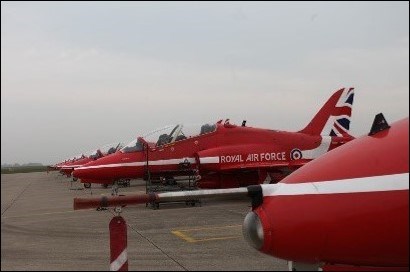 It is thanks to the Commonwealth War Graves Commission that the war graves are maintained and preserved for future generations. Over the last century, the church and the base have maintained a very positive working relationship, with burials of service personnel being laid to rest in a separate section of the churchyard, also maintained by CWGC. These men died defending their homes, their families, their friends, and their country. The base is situated in the Parish of Scampton. It therefore seems only fitting that they would be laid to rest at Scampton church with full honours and it is only right we should commemorate their bravery and triumph.

History of the Site

Situated just outside Lincoln, RAF Scampton is one of the oldest serving RAF stations in the UK. Many people, ranging from families and educational establishments to military historians, visit Scampton to learn more about its military history and heritage. On Armistice Day and Remembrance Sunday, many people visit Scampton to remember the sacrifice and bravery of the airmen from all over the world who have fought and died during the two world wars and other armed conflicts. The church has 107 war graves: some Canadian, Australian, New Zealand and German. It is in their memory we would like to create this window to forever commemorate those who have served and to educate our successors on the history of these events. 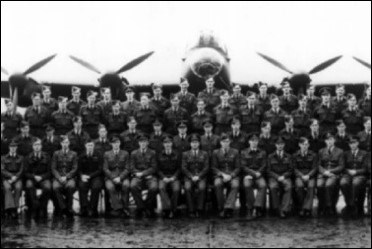 Scampton was one of ten airfields within the UK to be designated part of the RAF V Force. The stained-glass window serves as a reminder, commemorating the courage, bravery and determination of the pilots who served not just during the First and Second World Wars but also during the Cold and Iraq wars.

The window features an iconic Lancaster bomber: the aircraft used by 617 squadron. The inclusion of this is a reference to their raid on the Ruhr dams in May 1943, over 75 years ago, performing one of the most daring military actions of the Second World War.

However, the Second World War is not Scampton’s only moment of significance in regard to the commemorative window. The arrival of the Avro Vulcan carried a significant contribution during the Cold War in the 1950s, 60s and 70s. The Vulcan flew with 27, 35, 83 and 617 Squadrons, and 230 Operational Conversion Unit from RAF Scampton. We are therefore proud to celebrate the Vulcan's iconic image by presenting it in the window design.

In the last two decades RAF Scampton has also become home to the famous aerial acrobatics team, The Red Arrows. The BAE Hawk jet therefore forms the third significant aircraft depicted in the commemorative window at Scampton Church. First formed in 1990, the team comprises highly skilled pilots. They have toured worldwide: providing magnificent displays, and have become a symbol of the RAF and ambassadors of the UK. 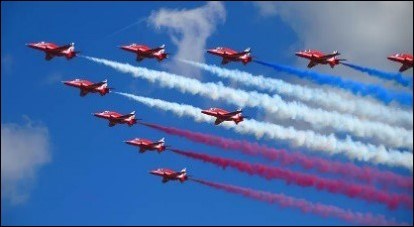 The pilots behind the project

The journey of this stained-glass window has been some time in the making; since the seventieth anniversary of the beginning of World War Two in 2009 and the World War One anniversary in 2014. The Royal Air Force has made a significant contribution to the project, along with the Battle of Britain Memorial Flight. They have provided specifications of the missions undertaken at Scampton and the many trials, tribulations and hardships brought to those who served at Scampton during the war.

Claire Williamson is the designer of this commemorative window, working alongside the company 'M.E stained glass', owned by her husband Ian. She is a specialist in traditional stained glasswork and has had a particular interest in working with RAF Scampton and the Church to create this astonishing piece of art.

As well as her traditional work, she also designs and makes new stained-glass projects for domestic clients, businesses, schools and community projects. She and her husband also restore traditional stained glass. Alongside this, Claire teaches stained glass making to individuals, groups and schools. The stained-glass panel of a Dove shown below is an example of her work and is currently on display in a church window. 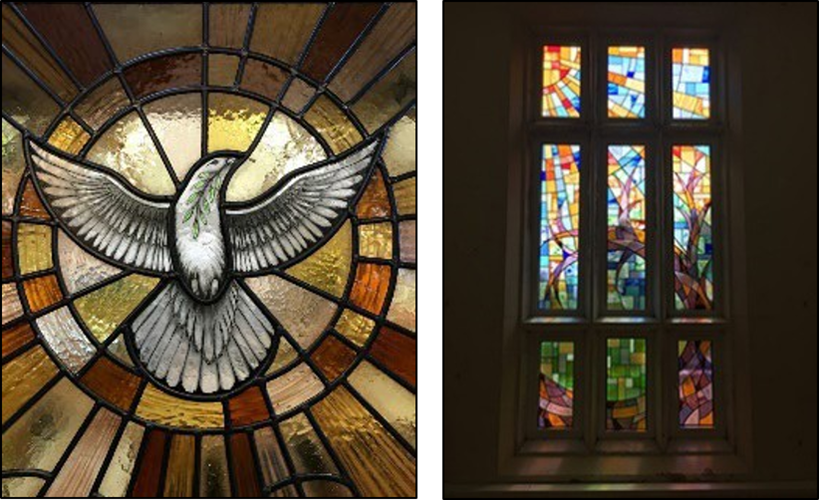 Alongside her traditional work, she can also triple glaze old and new leaded glass, using the contemporary form of glass fusing to add new dimensions to windows. Claire has such enthusiasm for this project and we are pleased with her achievement in creating this stunning design. Without her creativity and innovation in the designing and crafting of the window, this project would not have been possible.

Squadron Leader George (Johnny) Johnson, the last surviving member of the original 617 Squadron and of Operation Chastise, has also been very supportive in the development of this project. His recollections of the operations at Scampton have provided a great deal of detail and clarity of the events. 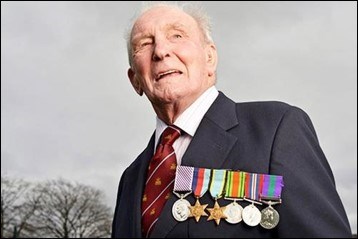 Wing Commander Bill Ramsey (Rtd) The only pilot to have flown all three of the iconic aircraft depicted on the window. Following his retirement from the RAF Bill became the display pilot of the 'Spirit of Great Britain' Vulcan XH558 and piloted it on its final flight to its resting place at Doncaster Airport. Bill is the operations Director for 'The Peoples Mosquito' and has supported the RAF commemorative window project from its conception. (Below seen flying a BA Hawk over RAF Scampton) 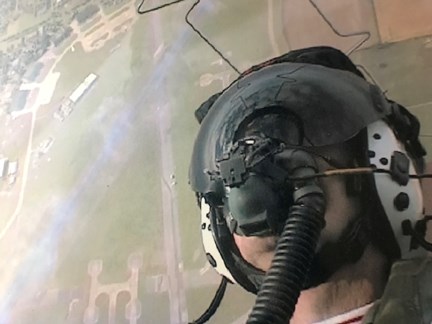 The stained-glass window was commissioned to be made by two well respected stained-glass designers who both hold an impressive portfolio. The basic makeup of the conceptual design was agreed at a meeting between the partners.

The RAF Scampton badge forms a central part of that design, alongside the winged RAF badge which sits proudly on the war graves in the churchyard. The inscription on the window was chosen by Wing Commander Parker and will read: ‘commemorating those who served at RAF Scampton 1918-2018’.

Illustrated below are the artist's impressions of the window and more detailed sketches of the three iconic aircraft. 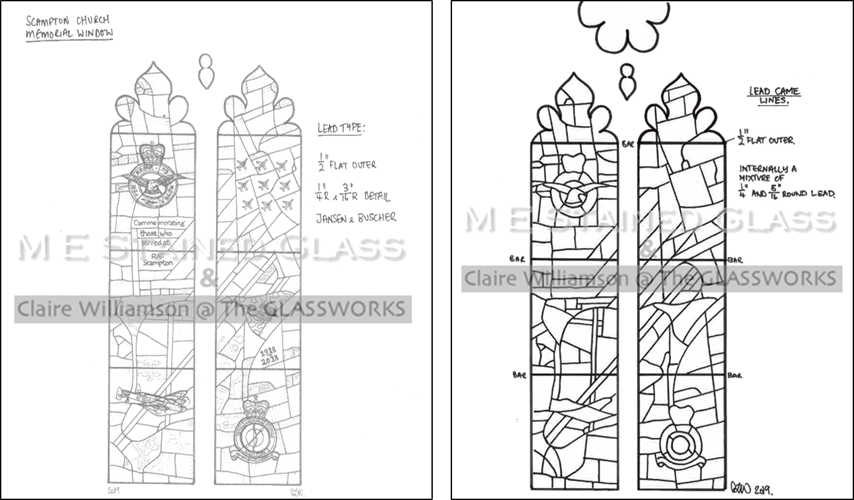 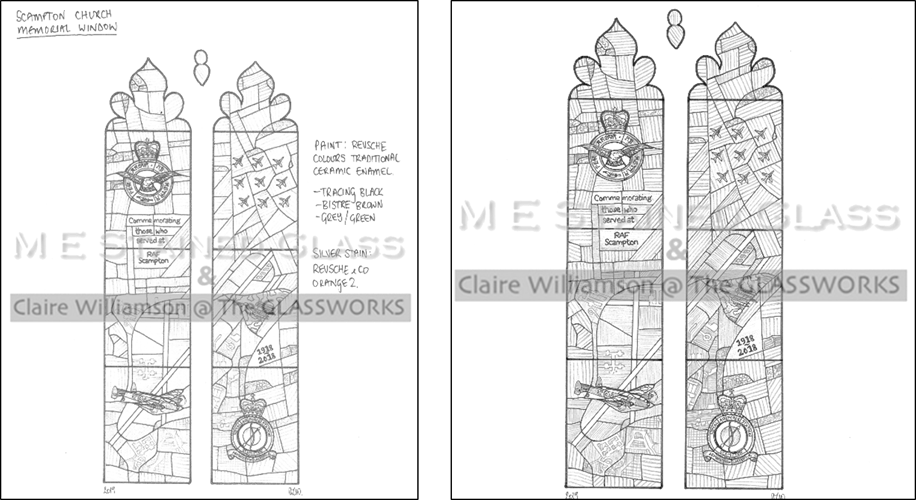 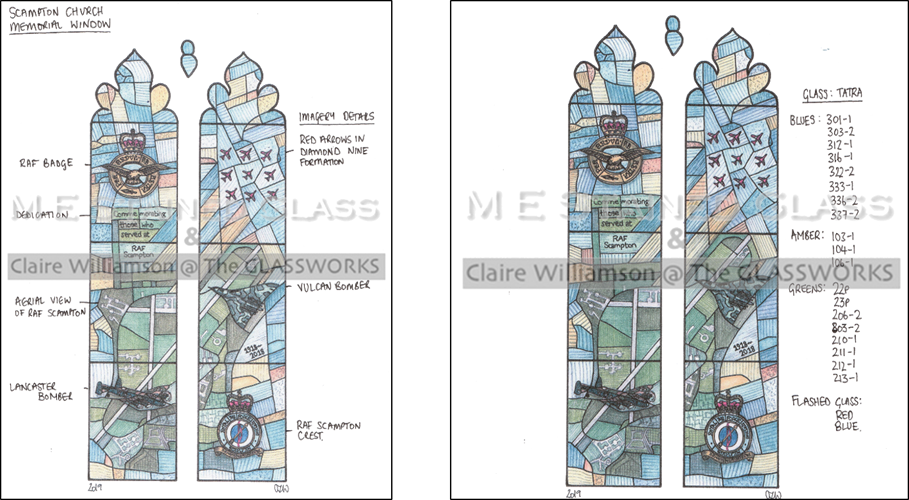 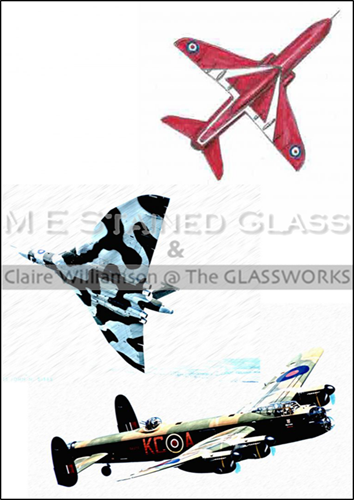 We intend for the window to represent the ideas of a new peace, reverence, remembrance, liberty, protection, gratitude for the ultimate sacrifice. To portray this, we included a dove with an olive branch. This will be placed in the rose window above the commemorative windows.

The station commander at RAF Scampton, the Diocese and Historic England stained glass window advisor were shown the initial concepts; with their feedback aiding the development of the project. Other interested parties contributed ideas with some further amendments then made before the design was finalised.

A sketch of the final design is shown below. The Queen's crown on the RAF badge (per ardua ad astra) will be replaced with the Kings crown in the final product. The window will be installed on the south side of the Nave, adjacent to the RAF ensign. 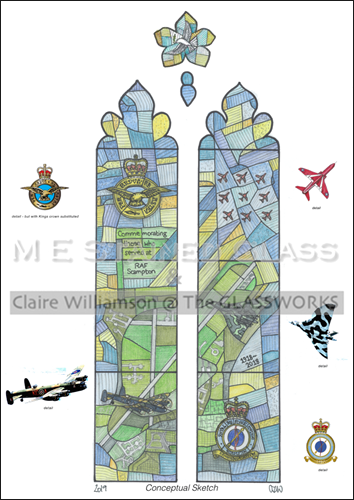 To sponsor and dedicate a piece of glass and have your dedication recorded in the leather bound commemorative book which will sit on an oak shelf beneath the window email: rafwindow@scamptonchurch.org

RAF Scampton has been closely connected to the village of Scampton and schools in the area. We are developing a children’s art project to run alongside the commemorative window installation, teaching children the sacrifices made by our squadrons and the history of the site. We intend to educate the younger generation on the importance of the events which have taken place over the last 100 years. The aim is to teach this through a creative outlet to inspire young people to experiment with new forms. We hope this will engage the students and spark their interest in the topic.

The children’s art project will involve 200 local children. The chairman of The Lincolnshire Lancaster Association will tell the children about the significance of 'Remembrance' and, under the guidance of the window designer, each child will make a glazed tile based on their understanding of what 'Remembrance' means. All the tiles will then be assembled to create large panels. Claire, the designer of our commemorative window, will be working with the children and delivering the workshops. She has run similar projects in the past, an example of which can be seen below. 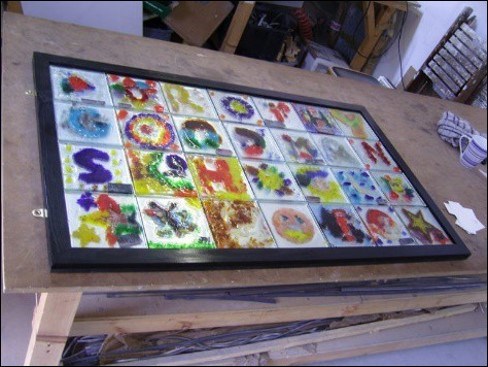 The Importance of Teaching Children About Remembrance

The following is an approximate visual representation of where funding will be spent: 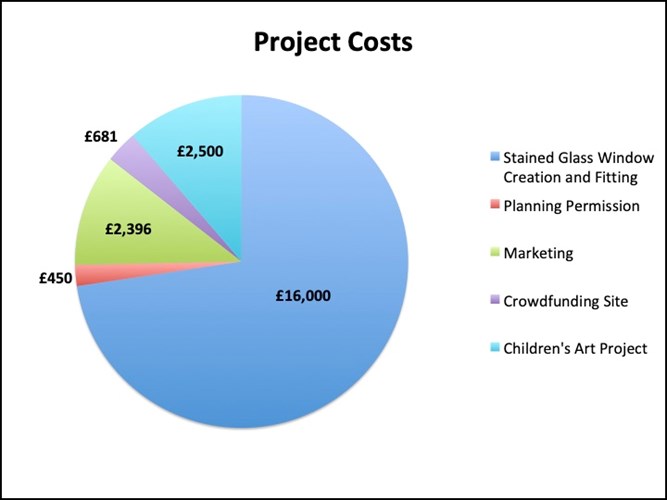 If the crowdfunding scheme does not meet the target, the design of the window will be reduced accordingly. This may result in a vastly scaled down version of the artwork, simply featuring the aircraft on panels of plain glass. We would also need to make cuts to the school scheme. In the event of the campaign exceeding the target, funds will be put towards developing facilities to create a community church and RAF heritage centre RAF & Commonwealth War graves heritage Centre at Scampton church to enable such events as the ‘Allies in Air’ exhibition. Click here for further details.

We believe it is incredibly important to commemorate the 100 years relationship between RAF Scampton and the Scampton Church in memory of those who have served during this time. We have a duty to remember the squadrons from all over the world who have served at the base, with people from all over the world also joining our forces. We want to remember those who have fought and for those who continue to serve. We intend to honour their commitment to their country. With your help we can make this happen.

Please visit our website and social media links for further information about the project:

We would like to thank the following organisations for their kind support to this project: 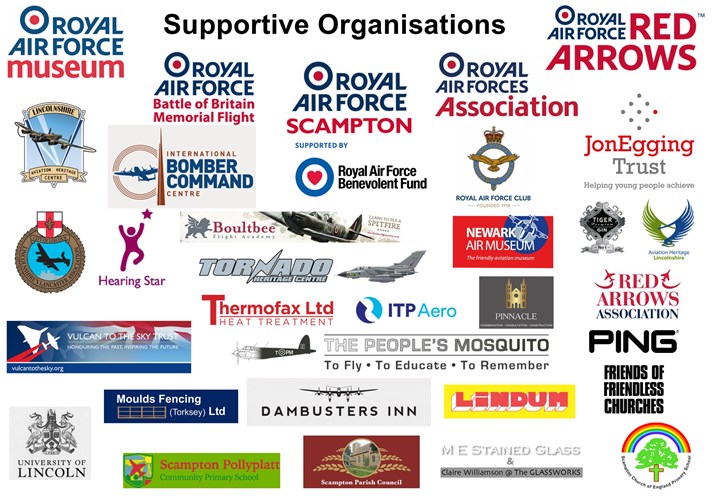 We want to particularly thank those who have specially contributed:

* Vulcan to the Sky Trust

* The Battle of Britain Memorial Flight

Please donate anything you can to this worthy cause. Help us commemorate all those at Scampton who have served over the last 100 years and are continuing to do so. We are hugely passionate about this project and hope your donations can help us take off.

Over the last hundred years since the formation of the Royal Air Force and the commissioning of RAF Scampton, there has always been a significant relationship between the air base, our Church and the community.