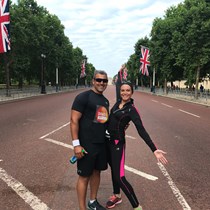 Me & Sophie have decided to take on the British 10k race this summer, just imagine Sophie running (Ha Ha Ha)… We are asking you to kindly give us a hand and sponsor us for our wonderful chosen charity.

Egyptian Society for Mercy to Animals (ESMA) is one of the great charities in Egypt which actively works to improve animal welfare in Egypt for all animals, including street dogs and cats, working animals such as donkeys, horses and camels, wildlife, animals in the Cairo Zoo, those sold in pet shops and live animal markets, and all animals slaughtered for food.

So Why Egypt and Why ESMA?

ESMA are on the ground providing food, shelter and medical care to over 1000 animals who were rescued from the streets in cases of severe injury, abuse, and neglect, whilst also raising the awareness of the public of animal welfare issues. ESMA works with animal lovers and volunteers in Egypt to bring justice in a number of animal cruelty cases, with few evident success.

With the effects of political turmoil in Egypt, combined with lack of awareness and proper education about animal welfare, animals are suffering not only in Egyptian streets but also Egyptian Zoos. In 2015 a number of local councils in Cairo and Alexandria started an organised campaign to cull stray dogs and cats from the city streets. Ruthlessly, these innocent animals were gunned down in horrible street blood bath, and poison was scattered in number of streets and roads all over the cities. Unlike other countries, animal welfare is not a priority in Egypt and plenty of work need to be done.

ESMA homes every year over hundreds dogs and cats to their everlasting happy homes in Europe and America, and they can only do that with the help of your donations.

Did you know: £1 covers the cost of an animal at ESMA for one day, £5 will buy 3 blankets to share among ESMA animals and £50 could buy a pod and blankets that will house up to 5 dogs.

If you don’t want to take my word for it, see here how your donation can make a lasting difference by watching some of ESMA videos on their Facebook page here