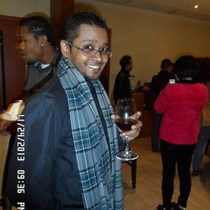 Weʼve raised $295 to To help fund my tuition, and cancer treatment.

In 2013, i was diagnosed with cancer - Clear cell hidradeno carcinoma, it's and extremely rare type of cancer. I had undergo a number of surgeries along with 7 cycles of chemotherapy, the surgeries included the amputation of most of my left foot, as this was where the cancer(tumor) was located, over a period of 6 months. And at the end of this period, i was delcleared cancer free. As well as during which i still attended my classes. It was in this very year towards the end of the semester, I was unfortunately informed that i had lost my scholarship, and so was unable to continue my studies unless i paid my school fees on my own terms. I had done so with the help of family and friends.

In 2015, my original year of graduation, the cancer had return in the upper part of my leg, i under went a number of surgeries (biopsy surgery, debridgement surgery etc.) chemotherapy and also radiotherapy for about a 2 year period. Unfortunately the cost of all these treatments and surgeries came at the expense of family and friends, simply because the insurance company here had refuse to cover the hospital charges; in 2015, the school refuse to let me graduate due to missing grades and credits, and had forced me into paying for yet another year, and since i was in the process of treatments, i had decided to pay and retake the missing classes; by the end of the year, the school refused to yet again alocate my grades and credit and forced me into paying for yet a second year, and so i did, again because i was still undergoing treatment.

It was in 2017 March, after attempting to exposed the injustice of the school i was attending, i had been EXPELLED and forced out of the dormitory. Over the past 6 months i have been searching for a new school so as to finish my studies, and accomplish my goal and dream of been a Medical Doctor and a future Heart Surgeon and also the final stage of the long 2 year treatment.

As my situation and condition stands right now, i have found a school(Binzhou Medical University) that can accept me to continue from the 3rd year, leaving me to retake 3 years of med-school, i am determined to accomplish my goal and finish what i have started. Also in term of my medical situation and condition i had been advised to stop treatment, because all methods and forms of treatment has not been working, the cancer is not responding. BAD News: Its final stage cancer and GOOD News: It has not spread to the other parts of my body. Final stage, meaning the cancer is not responding to treatment. My doctors here have given up, But I have not. I am currently in the working along with a Company in Chinese Tradtional Medicine, and they are going to be keeping me on a treatment plans for the next 2 years or so.

I'm a person of Faith, I believe in the midst of every storm there is a calm and it your reactions to your storms that defines you and your destiny. I'm an aspiring Heart Surgeon, very helpful, patient and determined. I love my family and friends. I just want my life back