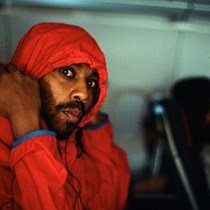 Shaun Bloodworth is a photographer living and working from Sheffield. He has taken an avid interest in the underground electronic music scene, documenting key players, collectives and musicians within the scenes from around the world. .

From his work with Rinse, FWD, Bleep, Tempa, and countless others - he has documented many many artists all over the world.

He has recently become very ill. He’s been in the Northern General Hospital for 4 months now, waiting for a liver transplant. He's also suffered an infection that led to him having his lower leg amputated. His transplant is now imminent, but it’s becoming critical that he receives a new liver soon.

Shaun is also self-employed, so this enforced and lengthy stay in hospital, and subsequent rehabilitiation, is making a bad situation even worse. These event are a chance for his friends to create something positive for Shaun and his family at this awful time.

Now is our chance to give back to one of the most loved men in the music industry...

All money raised from the event and this donation page will go directly to Shaun and his family, as well as a donation given to Live Life, Give Life - a UK based organ donor charity. http://livelifegivelife.org.uk/

Please donate generously for a man in need and probably the nicest guy you will ever meet in the music industry!

I am the Head of Music for Boiler Room; as well as managing the record label for Bleep, where I met Shaun in 2008 and have been working with him ever since. All proceeds will go to Shaun and his family directly, as well as a charity donation to http://livelifegivelife.org.uk.