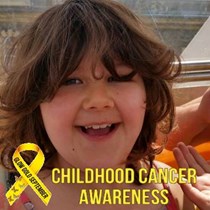 Weʼve raised £38,686 to Help fund cancer treatment for our 8 year old daughter, Amelia. She has recently relapsed with Neuroendocrine carcinoma in her bones.

Our daughter, Amelia, was originally diagnosed with a Neuroendocrine carcinoma in her chest in November 2014, after a seizure. It had formed in her Thymus and was driving the overproduction of cortisol in her body.

Neuroendocrine carcinoma, is a rare tumor, but is most commonly found in adults over 40. We were told straight away that treatment options would be limited, due to Amelia being so young, she was 6 at diagnosis, and because it is, generally, a tricky tumor to treat.

She was operated on and had the mass removed. Unfortunately there was local spread into the lymph glands, so in order to give chemotherapy the cortisol levels had to be controlled, so her adrenal glands were also removed in December. Chemotherapy started in January 2015. The first round made her really sick, and we stayed in Piam Brown (Southampton General Hospital) for a week, whilst she recovered. A month later the second treatment had to be abandoned as it had made her so sick it had caused her kidneys to salt waste. Fortunately our lovely Consultant Dr. Gary Nicolin had managed to find an alternative treatment by talking to his colleagues World wide. The 7 weeks of radiotherapy seemed to do the trick and this was followed up by 12 cycles of a drug called Temazolomide, as chemotherapy, that finished in May 2016. Amelia was declared NED (No Evidence of Disease) in June after a PET scan could not detect anything.

After a routine CT scan at the end of August 2016, Amelia started to complain of back pain. The pain was such that we visited our local hospital in Salisbury. After a few days she had an MRI scan. Chris and I received the devastating news a day later. The tumor has returned, this time in her bones. The scan showed both femurs, the pelvis and lower spine.

The only treatment available now is experimental drug trials, unfortunately these are not available on the NHS. Please help us give our daughter a chance.
£152,000 seems a lot, but will only cover 1 trial = 1 chance.

Amelia, Chris and I live together in Salisbury.