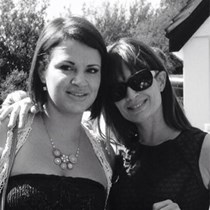 Thanks for taking the time to read this page. I have created it for my sister Kate, who has gone from achieving all of her dreams to living her worst nightmare in the space of 12 short, terrifying weeks. 2018 was supposed to be Kate's year, after getting through some pretty terrible experiences and ending 2017 with the birth of her and Paul’s first child, a beautiful baby girl. Instead she's facing the battle of a lifetime to fight a very aggressive form of cancer called High grade metastatic Mucoepidermoid Carcinoma. Here's Kate's story:

Kate's start to 2017 was one of the best she'd had in many years, as March brought the news that she was pregnant with her first and much awaited baby girl, Ivy. Kate's pregnancy was not an easy one and involved numerous trips to hospital with what she thought were miscarriages. However she fought on and in December 2017 Kate was admitted to hospital to be induced after developing gestational diabetes, which made the end of her pregnancy high risk.

In the early stages of her induction Kate noticed a very small lump on the left side of her face in front of her ear. Kate sought advice from the medical staff who were looking after her and they advised her that she was just recovering from a virus, it was probably a raised gland and not to worry. Two days after finding the lump, Kate gave birth to Ivy; a beautiful little bundle of happiness. After finally settling down at home; Kate, Paul and their new addition enjoyed a lovely Christmas and New Year together but all the while the lump continued to grow.

Within 2 weeks of finding the lump it had almost doubled in size. Kate sought advice from a doctor who again said it was nothing to worry about. However the lump continued to grow and Kate continued to worry. After being urged by her dad to go back to the doctor Kate returned to see a different doctor, who straight away recognised there was something concerning about the size and growth of the lump and Kate was referred urgently for tests. After a further two weeks of tests which involved blood tests, X-Rays, MRI, CT scans and biopsies it was confirmed that Kate had cancer. A very fast growing and aggressive form of cancer which a Pet-CT scan would later confirm had already spread to her lymph nodes.

As Ivy turned 9 weeks old, Kate was scheduled for surgery and endured a 5 hour operation to remove the tumour along with most the lymph nodes on the left side of her face, neck and chest; leaving her with nerve damage and partial facial paralysis. As the tumour had grown so large the surgery was unfortunately unable to completely remove all of the cancerous cells, leaving positive margins and perineurial invasion.

For the best prognosis, radiotherapy within 6 weeks of her surgery was advised however, due to staff shortages at the Leicester Royal Infirmary, they were unable to meet the 6 week recommendation and so Kate contacted hospitals all over the country to ask for a referral to get her treatment in time. Coventry hospital took on her case and quickly prepared her for radiotherapy however in the week before the radiotherapy was due to begin, Kate found two further lumps and was sent for further tests...Unfortunately, the cancer has spread significantly and Surgeons are unsure whether it is actually operable and if it was the chances of survival are very slim. Kate would have no quality of life either way.

Ivy is a 16 week old beautiful baby girl who should have parents undivided attention and Kate and Paul are new parents who should be revelling in their new baby.

With the help of some knowledgeable friends we've worked out that we need to try and raise £100K to pay for the treatment and other expenses such as consultants fees, blood tests, drugs, her immunotherapy. Kate has even considered selling her house to fund her treatment but this is not a realistic timeframe to sell a house and with a newborn baby to care for its not the most feasible option either.

The cancer has spread too far for Doctors to treat it and she has been offered palliative care. Kate is only 34 years old - the prognosis is not good and she has an uphill battle on her hands. Kate and her family need your help; she has everything to live for. Although we know the cancer cannot be cured, there is treatment available in Germany that could prolong and give her a better quality of life to spend with baby Ivy, Paul and her family.

For those that know Kate they will know what a kind, caring and selfless person she is and how very cruel life has been in dealing her the hand it has. If you have not met Kate then hopefully her story will give you a sense of the hell she is going through and how time really is not on her side. Anything anyone can donate will be gratefully received and will hopefully allow Kate to access the lifesaving treatment she needs. Thank you for taking the time to read this and donating if you are able to. We'll be holding fundraising events over the next few weeks too so keep an eye on the page for updates. Kate's cancer is unfortunately very complex and it is therefore difficult to provide a straightforward statement of her treatment plan and what we hope the money can be used for at this stage. What we do know is the cancer is aggressive and fast growing and if Kate's treatment plan changes, she needs to be in a position to access the care, support and treatment she requires without delay. I appreciate your help and understanding and again thank you on behalf of Kate, Paul and Ivy for all your help and support.

Before we had time to launch this page it was confirmed that Kate's cancer has spread massively and is now located near her spine and the base of her skull and brain. She is awaiting one final set of results from her Pet-CT scan but her doctors have warned that the spread is likely to be inoperable or risks leaving her severely disabled and disfigured. Their next step for Kate is palliative care, which essentially means preparing to care for her as she is now classified as terminally ill.

HOWEVER, Kate is anything but defeatist and messaged me soon after her appointment to ask that we start helping her look for options for immunotherapy. I am completely in awe at Kate's strength and determination here, but we are now literally fighting for her life and we need your help! We are making enquiries with clinics worldwide which has had huge success with immunotherapy to see whether they could help to provide Kate with the life saving treatment she now desperately needs. This treatment can be extremely effective but it is also very expensive and we are now looking to raise at least £100k. Our first starting point would be to help raise funds for Kate to access some consultations and gene analysis to give her a better understanding of her cancer and what treatment options would be best for her going forward.

The £100,000 raised so far has allowed Kate to start her treatment and access the drugs needed. We thank you all once again for your amazing generosity and support.