Will Thatcher raised £330 from 12 supporters 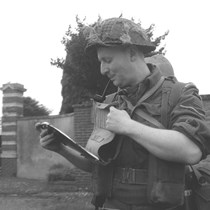 Recently the Royal Regiment of Fusiliers Museum (Royal Warwickshire) lost its funding. The Regimental Museum is the last link to the history of the one of oldest and most illustrious Regiments in the British Army, The Royal Warwickshire Regiment. We feel that the Museum, which is now the physical embodiment of the Regiment, should be maintained and kept in honour of everyone who served, allowing future generations to learn about its proud history.

Members of The Royal Warwickshire Regiment Re-enactment Group sadly were not able to attend the D-Day commemorations for 2020 or 2021 due to the ongoing pandemic. Normally the group would march the same route the soldiers of 2nd Battalion Royal Warwicks took on June 6th and 7th 1944, in the same uniforms and equipment the men would have carried 77 years ago. This would culminate with a ceremony and wreath laying at Lebisey wood just North of the city of Caen, where over 154 men were killed, wounded or captured.

This year, due to the ongoing global situation, our commemorative march (in full uniform and equipment) is being held in Warwickshire, from Kenilworth War Memorial to Warwick War Memorial on Sunday the 12th of September. Approximately the same distance the men of 2nd Battalion marched on June 7th from Pegasus Bridge to their ill fated action at Lebisey. We will be laying a wreath at both War Memorials in memory of those who served.

To learn more about the Regiment and its history, visit the Regimental Museum website: http://www.warwickfusiliers.co.uk/

Thank you for reading and for your support! We will see you on the 12th!