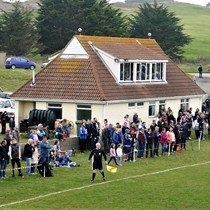 Weʼre raising £5,000 to build a clubhouse extension for Alderney Football Association at the Arsenal.

It is the 100th Anniversary of Alderney FA’s Muratti Victory .

We would like to celebrate by improving our very limited facilities by building a clubhouse extension with extra changing rooms so girls don’t have to change in parents cars and under 18’s can be separated from Adults. Also match officials will no longer change in a broom cupboard without a shower. The larger clubhouse bar and catering area will improve our revenue streams as currently only enough room for matchday squads, match officials and sponsors so our 305 Alderney FA Vice Presidents cannot gain access on matchdays. Alderney are the only club in the UK who have to fly to two thirds of their league games away from home, in the process paying expensive Airfares and often paying to stay over. We also sometimes play 2 matches within 20 hours to save money.

If we have the extra changing rooms it also means we can qualify for a longer term goal of a 5G pitch with Multi-Sport use for our Island that has no indoor winter training facilities and 90% of island kids never get off Island before they are 16 to play any competitive team sport. The extra facilities including storage would also mean a basic Sports Hall shell could be built without the expensive infrastructure

We have raised over £99,000 towards a grand total of £309,650, which has increased substantially not just because of our 3 months delay on starting, but because we have added more items for the long term future of the site. These include a Storm Grey Water Tank and significant provisional and variable sums as well. We have grant applications pending for £65,000. We are looking to reach £155,650 then apply for matched Football Foundation Funding of £154,000. (£1,650 Architect and planning fees cannot be matched, but will have raised another £3,000 on Bonus balls by this final stage) Please note these higher cost figures have also included labour at normal Island rates (original costings were at 50%) but we hope these will be significantly reduced by some lower hourly rates. If you are a skilled worker in any department of the construction industry and prepared to help reduce our costs please email me.

In the immortal words of Martin Luther King ‘I have a dream’. (4 actually)

1 To have the basic sports facilities that most other people in the UK take for granted.

2 With these facilities Alderney could host the Island games in 2031 thereby giving our current Island kids the aspiration of playing competitive sport for their beloved island on home soil and also we could attract more visitors transport permitting.

4 To win the Muratti again, please remember we are only 1,760 against Jersey’s population of over 105,500 and Guernsey’s 65,000. The passion is so great that last year more than a third of the Island’s residents turned up to watch.

Other ways to help include becoming an Alderney FA Vice President for £10 a year supporting a mainland club paying into our account 24725860 Sort Code 30-93-73. If you email me reg@parkcameras.com you will also receive a regular email newsletter and appear in our matchday programme. For companies or more well off individuals there is the opportunity to go on the honours board in the new extension for £500 . Please pay this into our special Alderney Football Association Fund RS account 36997168 Sort Code 30-93-73 . Any help is very much appreciated for our tiny Island.