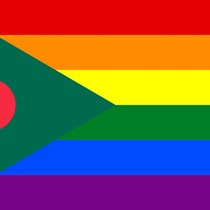 Weʼve raised £565 to initiate LEGAL BATTLE against section 377 of Penal Code in Bangladesh. This law criminalises the LGBTQIA+ community."

Most Commonwealth countries have inherited a Victorian era section 377 of Penal Code which criminalises sexual acts "against the laws of nature". Many such independent countries with repressive religions have retained this penal code and have used it to suppress any notions of citizen's rights for the local LGBTQIA+ population. Due to section 377 in Bangladesh's penal code, homosexuals in the country are criminals by definition and homosexual acts are punishable with imprisonment for life, or with imprisonment of either description for term which may extend to ten years, and shall also be liable to fine. Moreover, there are no rights to organise, speak up and most importantly seek protection from the law enforcement agencies, should gay people find themselves under threat from Islamic fundamentalists. The last factor played into the incident on April 25, 2016 when a prominent gay rights activists Xulhaz Mannan and gay cultural activist Mahbub Tonoy were mercilessly hacked to death by such militants in Xulhaz's home in Dhaka.

No government in Bangladesh of any political stripe has dared to repeal section 377 out of fear of backlash from Muslim fundamentalists and also out of a misguided notion of what is culturally acceptable. The only way to change the situation is through the legal channel - that is by filing a writ petition to Bangladesh's court system to declare section 377 of Penal Code to be against the constitution of the country. Such an argument can indeed be made as has been done in a similar case in India. Bangladesh's secular constitution does not allow the selective denial of rights to a group of her citizens by virtue of any criteria. It is expected that the lower courts of the country will not rule in favour of this private petition by us. Therefore we plan to take the matter up all the way to the Supreme Court.