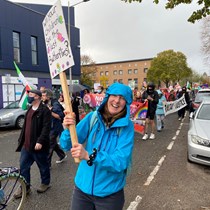 Weʼve raised £5,000 to Restore and Repair…. We are raising funds to help replace the lost trees in Bute park.

Just wanted to say a massive thank you for your support and donations so far (your support has been amazing!), and let you know what we want to do with some of the money raised. The plan is to start a Bute Park community orchard, planting edible apples, pears, and plums of rare Welsh varieties, working in harmony with the arboretum. This will give back to the park threefold…

- by planting more trees and helping restore the biomass we lost

- by giving the park a means to give back to itself with fruit that will feed the soil and countless insects, birds, and animals (including ourselves!)

We want to know what you think to this idea. Would you be happy with the money we’ve raised going towards this community orchard idea? Would you be willing to help us with the next step to persuade the council to say yes?

If so, we’d massively appreciate any time given to word your support as a message to melissaboothman@hotmail.com

We’ll collate these emails together as one voice in declaration of positive action to show to Cardiff Council. The more messages we have the louder that voice will be!

This is the first step on the path of positive change after the atrocious vandalism of last year.

Step 2 = gaining support (with your help!) and momentum for change

Step 3 = getting the Council to listen and say yes

Step 4 = putting action to those words and Reclaiming Our Park

Meanwhile our crowdfunding continues and we are still heading towards our target, so spread the word, share the love, and let us know what you think to our idea for the orchard!

With love from Mel and The Secret Garden Team

I want to start by thanking everyone who has shown empathy and kindness, you are all amazing. Bute Park is the green heart of Cardiff, it means so much to so many. A sanctuary for us all and place to escape.

We want to set up this fundraising page to help contribute towards the costs for restoring and repairing the damage that was caused recently.

The recent acts of gross vandalism that were carried out on the night of the 9th of September left many areas of a place that people of Cardiff used to go to for enjoyment in a state of ruin. This vandal attack has happened against a backdrop of increasing unease. During the last three months, Bute Park has tragically been the scene of a series of awful crimes. Ones that have filled our beloved park with negativity and made people feel unsafe.

We aim to counter these attacks upon one of Cardiff’s most treasured natural spaces with gestures of positivity.

Having gathered to walk in unity and celebrate the space, our most pressing issue is the recovery of the park. The money raised will be used to replant trees* and restore some of its infrastructure. Following that, our long-term goal is to create a legacy fund to ensure against future losses to vandalism. We are also looking into the possibility of a festival to celebrate Bute Park.

The park was gifted to the people of Cardiff by John Crichton-Stuart in 1947 for all to enjoy. Together, we wish to reclaim that sentiment. Stand together in a show of strength and solidarity, highlight the importance of green spaces, and unite against mindless vandalism.

Thanks to all of you who have been in touch x

*This page has been set up by the Owner of the Secret Garden Café in Bute Park. *Just a note about planting trees in the park: Many people have kindly offered to donate saplings, and the sentiment is very much appreciated. But please note that it is critical for the park’s bio-security that new saplings are procured through approved suppliers and planted within a strategy managed by the arboretum team. This is to inhibit the spread of plant pathogens.