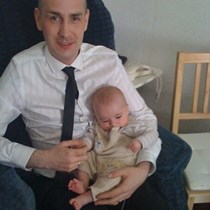 Weʼve raised £130 to support my friend and his family following the sudden death of his brother aged 38. His family has always had a special place in my heart.

Vijay Urusula passed away suddenly on 17th August 2017. He was only 38 years old. His family are still in a complete state of shock, no parent should have to attend their childs funeral. Vijay was a kind, decent, honest man with morals. Vijay loved his family very much and as the first born he took on the responsibility of looking after his family. This is something he took extremely seriously as nothing was more important to him than family. He made sure his parents could rest in their retirement and he was always there sorting out problems for his brothers and sisters. Everyone looked up to and respected Vijay, myself included. He was such a strong man that he always put other people before his own needs and he never complained once. Vijay was highly intelligent, spoke at least three languages fluently and had a masters degree, he was softly spoken but had a calm authourity about him. He was extemely religious and his Hindu faith was important to him. If everyone had the same morals and human decency as Vijay this world would be a much better place, there are some special people who are irreplaceable and will never be forgotten. I felt it important to let people know what a great man Vijay was and how much he will be missed.

I'm looking to raise £1000 to cover the traveling costs to India for his youngest brother who lives in London. When Vijay passed away his brothers passport was with the Home Office as his visa status was being updated and despite the family emergency could not be returned for up to ten days. Hindu tradition means cremetion has to take place within 48 hours of death. Despite desparate pleas his little brother missed the funeral which has only added to his families distress. All he could do was watch clips of the funeral on his moblie without a single member of his family around him. This is a heartbreaking situation which they do not deserve but are facing with great dignity. His brother is very special to me and I'll never forget how much he has supported me in the past. I just want to try and help him now. Vijay would want his family together and it feels so wrong that they are still apart. Vijay was right, there is nothing more important than family. Right now a grieving mother needs her family together and he just wants to be with his mum. Your support would be greatly appreciated.