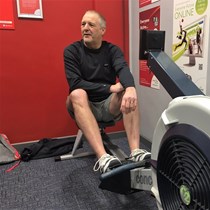 On 22 September, I will be throwing darts on my own for 12 hours and trying to hit 300 scores of 100 or more - which equates to roughly a ton or more every seventh visit to the oche. The event will take place at the Cleveland Inn, Cleveland Street, Normanby, Middlesbrough from 8 o'clock in the morning and I am hoping to raise funds for Grangetown Netball Club's elite squad.

Over the past five years, I have completed in the region of 120 "challenges" to raise mental health awareness (www.richardkirby.org) - to show that it is fine to talk openly about mental health and to never be afraid to ask for help. I've been lucky enough to meet some wonderfully supportive and inspiring people during that time - including coaching staff and players at Grangetown Netball Club.

A couple of brief appearances on court (as part of the challenges) led to me wanting to get more involved with this amazing club; and I now do player interviews and write match reports to try and raise the profile of a club that is run for the benefit of the local community by incredibly dedicated volunteers.

Earlier this year, the club's elite squad achieved promotion to Mizuno Premier League division 1 - the top division of English club netball. It is a truly remarkable feat, which ranks Grangetown as one of the top ten clubs in the country.

The determination and ability of the players and the commitment of the team behind the scenes is remarkable and as this is my final "challenge" I wanted to try and raise a bit of money to support the team as a thank you for all the support they have given to me.

If you feel able to donate, that would be incredibly kind - thank you so much. If you want to come along to the Cleveland Inn on 22nd, you would be more than welcome ... members of the Grangetown squad will be popping in during the day; and their historic first season in Prem 1 gets underway the following day.