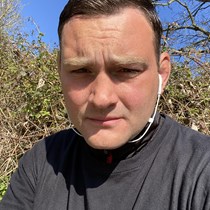 Weʼre raising £5,000 to Help raise awareness of Battle Back Golf and Detecting for Veterans.

By completing this event I will be the first person to do so. Nobody has done 30 back to back marathons with a weight of 28kg.

Why Battle Back Golf?

Battle Back Golf was founded at the Defence Medical Rehabilitation Centre, Headley Court in 2009. This military initiative is designed to utilise the sport of golf to support wounded, injured and sick (WIS) service personnel. Over the years the programme has proved successful in supplementing the physical, psycological and cognitive rehabilitation of over 200 serving and veteran personnel.

Battle Back Golf has played a significant part of a close friend of mines life. Simon suffered a life changing injury in November 2015. Simon who initially went into hospital to have his thyroid removed ended up having a Tracheostomy which ended his military career And permanently changed his life. Simon served a total of 28 years within the British Army. He joined the Army Catering Corps 1989. Simon was introduced to Battle Back Golf through a friend in 2017. At this time Simon was at his lowest. Fighting his mental health issues on a daily basis to the point where all his thoughts were aimed at committing suicide. Simon has represented Battle Back Golf in a Ryder Cup style competition against Australian injured veterans both in Australia and the U.K at Celtic Manor. In Simons words “The banter and friendship is like being back in the military”. Golf is now what gets Simon through day to day life. A golf course is where he can keep his demons at bay because all he is focusing on his playing his next shot.

Why Detecting for Veterans

Detecting for Veterans was formed in 2017 to bring together the tri forces family and those who support our Armed Forces across the world enjoying the hobby of metal detecting. This hobby has proven for many veterans to be a gateway to building friendships improving mental health and helping with PTSD.

Please Please Please help me to achieve the goal of £5000. It would mean so much to not just myself but also to the members of both of the great organisations mentioned above.