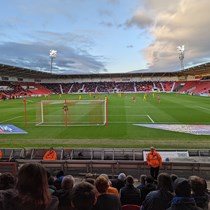 Weʼve raised £2,020 to help Clare and James following the passing of Richard Bailey

Richard Bailey dedicated more than 30 years of his life to the club he loved and was Doncaster Rovers through and through.

His shock death at the age of 54 has prompted tributes from fans, players both past and present and supporters are hoping to raise money for his widow Clare, who also works for Doncaster Rovers and his son James.

Richard was passionate about Doncaster Rovers and a familiar face to supporters, both at Belle Vue and the Keepmoat Stadium, and held a number of roles during his long association with the club.

He began working in Doncaster Rovers’ Football in the Community in the early 1990s, initially as a community coach in schools.
He progressed through the ranks to become a community officer, overseeing the schools programme while Football in the Community evolved into the Foundation.He played a key role in establishing girls football within the club’s community programme alongside Eric Randers on. Latterly, Richard held the title of health and wellbeing officer within the Foundation.

He continued to work for the club as an ambassador, guiding group experiences and, in particular, matchday mascots, for whom he provided in-depth tours of the Eco-Power Stadium. As well as working for the club, Richard was a passionate Rovers fan and a recognisable face on away trips.
Club Doncaster chief operating officer Shaun Lockwood said: "This is a truly sad loss. We have lost one of our own. Richard was a wonderful person and someone who has been synonymous with Doncaster Rovers for more than 30 years. Many fans today will have become supporters due to the wonderful work Richard delivered through Rovers in the community, the Foundation or as a club ambassador. He would always find time and make an effort to make every individual feel special and included. Our thoughts are with his family and friends, as colleagues and supporters alike share our condolences."

Please donate, if you are able to, in Richard's memory and to help his family at this time.