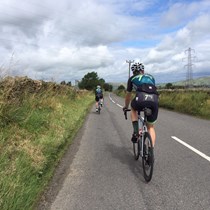 Weʼve raised £1,115 to Ride 4 Rocco. I am cycling 250 miles to raise money for Rocco's treatment & to raise awareness of his condition Plagiocephaly.

Thanks for taking the time to visit my JustGiving page. I am raising money for my best friend and their little boy Rocco who has been through so much in the first year of his life...

Here is Rocco's mum explaining what he's been through:

"When Rocco was 2 weeks old we noticed a huge lump on his neck. It had simply appeared over night. We went straight to the GP, who unfortunately was not able to make a diagnosis, so we were quickly referred to the children's hospital. As you can imagine, we were very worried about Rocco. After a physical examination, we were told that Rocco's lump was a Sternocleidomastoid Tumour in Infancy. This is a rare benign mass in the muscle at the side of the neck. This condition affects less than 1% of newborns, mainly males and is often on the right side of the neck. It is however one of the most common of the congenital muscular torticollis conditions (twisted neck).

Due to this condition, Rocco turns his head to one side which has now caused the flattening of one side of his head (plagiocephaly). We also noticed that Rocco's ears are misaligned. Measurements were taken of Rocco's head and his condition is causing asymmetry of his face. As there has been very little change with Rocco's head, we were given information about cranial helmets.

On 4th July we took Rocco to a specialist clinic and he was examined and had a scan of his head. This is when we were told that Rocco has severe plagiocephaly. At the moment the scan showed that two of the quadrants on his skull are shallow; at the front and at the back/side. We have been really worried about Rocco and want to do everything we can to fix this for him. Treatment for Rocco will involve him wearing a special non-invasive helmet for 23 hours a day for the next six months. He will be reviewed regularly at the clinic and hopefully this will help fix his condition.

Unfortunately due to 'lack of research' the cranial helmet is not funded by the NHS. We therefore need to fund this privately at a high cost. Headstart4babies is a charity supporting families, so we thought we would try and do some fundraising for the charity and to help fund Rocco's treatment. It was a big decision to go forward with the treatment and it has been a big decision to ask for help with funding.

Thank you for reading Rocco's story please donate to help Rocco and others like him who suffer from this condition!