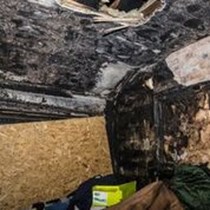 Weʼve raised £55 to help raise money to refurnish the Rigby family home after a fire destroyed everything!

On November 4th the Rigby family home in Rainford St-Helens was devastated by a house fire, caused by a brand new faulty electrical item, in the main bedroom of their home. The fire exploded windows and caused irreparable damage, destroying over 90% of their belongings.

As can be understood the Rigby’s are devastated for their loss but are thankful for the fast action from an off duty fire man and Eccleston fire brigade. They are thankful that no one was hurt.

Over the past 18 months the Rigby house has been decorated from top to bottom by their son. He also fitted all the relevant aids that where needed for Mrs Rigby’s requirements (anyone who has visited would agree that their home was a mini palace).

On the day of the fire a new carpet had been fitted in the main bedroom and it had been fitted out with all new furnishings one of which (unbeknown to the Rigby’s) was faulty, they had just finished the room and when for a cup of tea, 10 minutes later the smoke alarms sounded and a search for the cause began, upon opening the bed room door the fire engulfed the door way and hall.

The Rigby’s exited the property and went a safe distance away, it was at this point they realised the dogs where in the property, so they went to secure them in the back garden, an off duty fireman notice the smoke and rushed to help, it was then the windows exploded and smoke encapsulated them.

They safely rescued the dogs at the property as the fire brigade arrived,

The fire was extinguished effectively, which although it prevented the fire spreading. It wreaked havoc upon the furnishings with irreparable smoke and water damage.

The family are currently staying with family and are hoping to return home after extensive works around February. They are extremely overwhelmed with the support they have received from neighbours, friends and family but although we can provide emotional support we don’t have the financial support they need. They have had no help from third parties with anything; they have spent all day everyday sieving through charred remains trying to salvage anything to no avail. Myself and the family have both been completely shocked to find that considering in this day and age we help people in need all over the world, there is nothing in place to help families in the U.K who have been struck by such a disaster.

The just giving money will go towards replacing essential items in the home, as like many, the Rigby’s unfortunately didn’t have insurance to cover such extensive damage.

The Rigby family are exceptionally proud private people, and this will not sit easy with them.

THEY ARE THE ONES WHO ARE NORMALLY THE FUNDRAISERS FOR OTHERS IN NEED.

They have nothing left; they literally have the clothes they wore on the day of the fire!!

None of this is helped by the fact that Mrs Rigby is still extremely ill. Not only is she a survivor of breast cancer, reconstruction surgery, and chemotherapy, leaving her with chronic lymphedema in her left arm.

She has extreme deterioration in her spinal column leaving her in permanent chronic pain. She was diagnosed with a terminal aneurism late 2015, and underwent extensive brain surgery to rectify this. This has left her with memory problems and balance issues down her right side, along with chronic brain fatigue. Due to this surgery she has partial blindness (which requires special aids).She is also deaf and had special aids for deafness, which now need replacing.

Her son who resides with her is her carer. Another member of the family is still recovering from a recent triple heart bypass.

It’s quite clear that this family have had their fair share of bad news and they always bounce back bigger and better, but where do you begin to bounce back from such devastating damage to your family home. This is one thing most people don’t have to worry about, losing their home in an instant. Memories and treasured belongings including irreplaceable photographs of their daughters, Elizabeth who was born asleep, and Jemma who was involved in the alder hey organ retention. THESE PHOTOGRAPHS ARE GONE FOREVER

Their home has always been a loving welcoming place to visit, please try to put yourself in their shoes, and be generous. HELP MAKE THEIR HOUSE A HOME AGAIN.