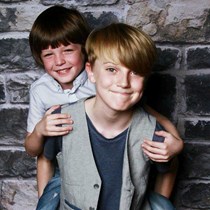 Weʼve raised £1,290 to Lets get the Redfearns JFC clubhouse up and running.

This time last year our 6 year old son Riley suffered arterial inflammation and a spontaneous vertebral arterial dissection causing him to suffer a stroke that has left him with significant damage to the cerebellum in his brain. He spent some time in hospital while the causes and effects could be investigated - we are still waiting for answers! During his stay a number of other concerns where found (including the apparent 'loss' of a kidney and issues with eye sight including cataracts and visual field defects). The effects of his stroke are still being recognised and as he gets older and learns to adapt to one of the areas of life that he now finds a bit more tricky another seems to come along, these include cognitive, sensory and learning problems, speech, communication and memory issues and frequent aches, pains, tingling and numbness in his limbs and headaches.

As I am sure you can imagine this was a really challenging time for our family and of course for Riley. But he never stop smiling - well until the doctors told him he couldn't play football again, and just weeks after being spotted by the Barnsley scout too. His goal and motto was always to do as the doctors told him to so that he could get those boots back on and be on the pitch with the rest of the under 7's (now under 8's). They were (and are) his second family and the support that those amazing little men gave him was heart warming (especially how they looked after him when he was given the OK to play again) as was the love and support shown by all the parents and of course Chris the coach, who made sure even from Sheffield Children's Hospital Riley was always included and part of the team, even making his assistant coach for a while!

So as a way of saying THANK YOU the whole Redfearn JFC family Chip is raising money through sponsorship. His plan, along with Chris and Mark (and anyone else wanting to join them) is to ride their bikes from Flamborough Head on the east coast to Redfearns sports ground - a total of more than 85 miles! This is happening this July so we only have 4 months to train and get ready.

The plan is to earn fund so that Riley can give back to this amazing club by hopefully raising enough to make a good start on the club house that has been left unoccupied for far too long.

Anyone and everyone associated with this club is (in our eyes) a legend.