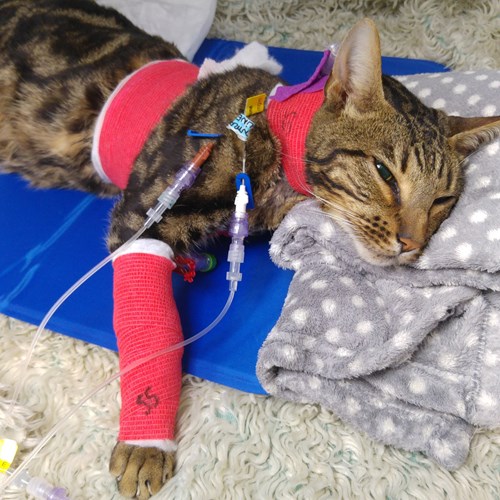 Ringo Starr is a beautiful and charismatic cat who unfortunately got hit by a combine harvester on Monday 25th June. He lost the whole of his front left leg above the elbow, shattered the back left leg in 3 places and damaged his tail.

Despite his significant injuries, Ringo managed to crawl across the fields and through a neighbour's garden where he came to a low gate. Usually this would have been no problem with a small jump over and back home. With both leg injuries on the same side, he simply lay there - we think for approx. an hour - before we called him in for his dinner.

Upon hearing my voice, he started what I can only describe as screaming. He then tried to get under the gate to me and unfortunately got stuck. I first noticed his front leg missing when I went to pull him through. It took what seemed like an eternity to manoeuvre him into a position where we could slide him out and when I picked him up in my arms, he didn't move at all - I guess he knew he was safe and accomplished what he wanted to do, get home!

The next few hours were a bit of a blur. We drove at (ahem) mph to the emergency nighttime vets which was 30 mins away, talking to him all the way there as he was eerily quiet.

The vet assessed him, gave him painkillers of course and said he'd only seen an injury like this with hedgecutters - that in itself doesn't bear thinking about. He said strangely that Ringo didn't appear to be in shock, was fairly alert and responsive. He did however look nothing like the cat we knew and loved with the exception of his face and massive, sad eyes looking up at us as he was slowly sedated.

The vets assessed and confirmed the open fracture in his left leg. An X-ray was sent off to Fitzpatrick's Referrals (the Supervets from the TV show) as they were close-ish and were deemed most capable to handle him from here.

Ringo has now had the back left-leg pinned and plated however the soft-tissue damage looks worse than it appeared. It is highly likely that he will also have to get the back foot removed and then, after his open fracture has healed in 6 week's time, a prosthetic leg will then be his only option for survival.

We have insurance but unfortunately the vet fees have taken us by surprise and we have a claim limit of £3,000. If you take anything from this, I would urge you to look at your pet insurance and look what claim limit you have We are currently up to approx. £9,400 for the emergency overnight vet fees, the full amputation of the front leg (or what's left of it) and the plating / pinning of the back left leg.

To survive, Ringo will need a prosthetic leg which together with the surgery will cost a further £10,000.

If Ringo was a 14 or 15 year old cat then we might be thinking he's been through enough, has had a good life and now it's time to say goodbye. However, he's only 2 year's old on the 10th July 2018 and he was determined to crawl across those fields, to get home where he knew he would be safe - he's done his part, so I think it's only fair that we do everything we can for him now.