Tradition has it that Moluag brought Christianity from Ireland to the Isle of Lismore in the middle of the 6th century, just at the time that Columba was establishing his monastery on Iona. He would have been attracted to the island by its fertile limestone soils, but also because it had been a centre of power and ritual, stretching back into prehistoric times. We know that he was on Lismore from an entry in the Irish Annals recording his death in 592. Looking around the ancient graveyard, we see concrete evidence of the Early Church: the 8th century cross, now in fragments and protected in the island museum, but its base remains. Next to the cross is the baptism stone and, in view below, the sanctuary stone, which is held to mark a “safe area” round the earliest church, offering protection to individuals fleeing from punishment. The oval shaped field boundary round the parish church may well trace the outline of the monastic boundary. All of these signs of Moluag’s presence were confirmed in a dramatic way in 2018 when a community archaeological dig next to the sanctuary stone revealed a 7th century Christian burial within an older cemetery enclosure. 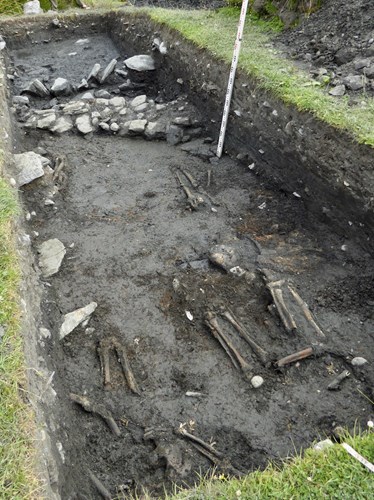 In a three-week dig in September this year, we hope to complete the exploration of the Early Church cemetery, guided by a geophysical survey carried out for us in 2019. Under the professional supervision of Dr Clare Ellis and Dr Angela Boyle, the leading bone specialist, the aim is to take samples of as many burials as possible, to determine date of burial, age, gender, some aspects of health, and the geographic area of origin. Samples will also go to the Crick Institute in London for DNA analysis as part of the “1000 Ancient British Genomes” Project. (The Institute has offered £10,000-worth of analyses free of charge). All of this will tell us so much about Lismore and its people at the time of the Early Church.

The community archaeology on Lismore, involving a team of around 20 volunteers each year, is motivated by the shared vision of Comann Eachdraidh Lios Mor (The Lismore Historical Society) and Lismore Parish Church, described in the film A Sacred Island

The three-week archaeological dig in September, involving two professional archaeologists, at an island site, will be expensive. A large part of the funding will be met by the generous bequest of the late Hugh MacPherson, and a grant from the Society of Antiquarians of Scotland, but there remains a deficit of £5,000. The Society is now seeking donations up to a total of £2,500, on the understanding that the MacDougall McCallum Foundation (USA) will provide match funding. [The Foundation, which has been a great support to the Society over the years, celebrates two natives of Lismore who emigrated separately to the USA in the 1870s, married in Minnesota, and prospered.]

As well as financial support, the Society is actively looking for participants in September from all enthusiasts, whether experienced or not (full training will be provided). Look out for further information on the Society website: Lismore Gaelic Heritage Centre