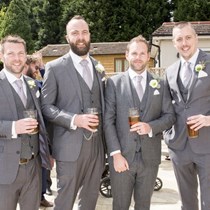 Weʼve raised £2,615 to help fund the work of two veterans charities in the UK.

Thanks in advance for any donations you are able to give,

The National Three Peaks Challenge involves climbing the three highest peaks of Scotland, England and Wales. The total walking distance is 23 miles (37km) and the total ascent is 3064 metres (10,052ft). The total driving distance is 462 miles and the challenge is to do it all in just 24 hours! We will be beginning this challenge on Friday 13th May 2022.

Rock 2 Recovery and REORG are two UK based charities aiming to support the mental health and wellbeing of serving members and veterans of The British Armed Forces.

Rock 2 Recovery was co-founded by SAS Who Dares Wins Jason Fox in 2013 and is a free service that provides coaching sessions and an emergency helpline to serving members of the British Armed forces, veterans of the British Armed Forces and members of the 999 services and their families. Focussing on emotional wellbeing Rock 2 Recovery focus finding their 'rock' users of their services are given creative, active and therapeutic sessions where recipients often talk of feeling a huge change after just one visit. With locations in London, Exmouth, Jersey, Edinburgh Napier University, Isle of Man and York, Rock 2 Recovery is out there helping those is need every day.

REORG was founded by Sam Sheriff MBE with an aim of using the discipline and focussed training of Brazilian jiu-jitsu to help those most in need. REORG now counts Mark Ormrod MBE amongst it's Trustees and works with people who have a whole range of serious, life-altering physical injuries, as well as those suffering debilitating post-traumatic stress disorder (PTSD) and depression. The difference that Brazilian jiu-jitsu can make is nothing short of incredible. Physically BJJ is brilliant because you can adapt it to your abilities, and you get a workout that puts every part of your body on red alert. And the accompanying psychological benefits are something everyone notices as soon as they start training.