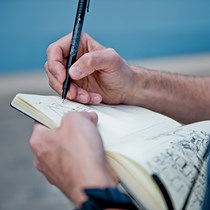 The trip to Bangladesh has happened now. We visited a Rohingya Refugee Camp called Unchiprang where members of the Bangladesh Association Cardiff helped distribute the aid that the people of South Wales have paid for. It was wonderful to see the smiling faces on the children in the school there as they received some warm clothing and a hot meal. I visited the medical centre where the medicines will be used and drew pictures as Rohingya Refugees collected the supplied of cooking oil, salt, flour, blankets and equipment. 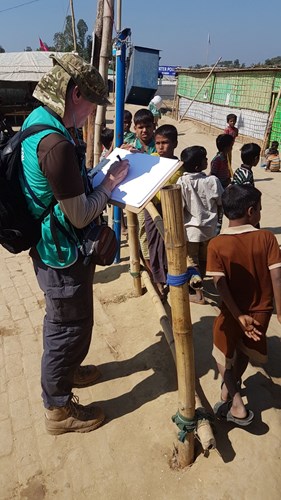 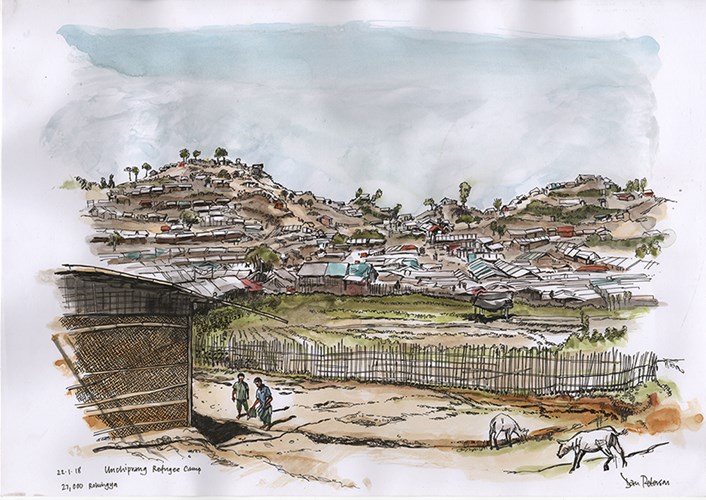 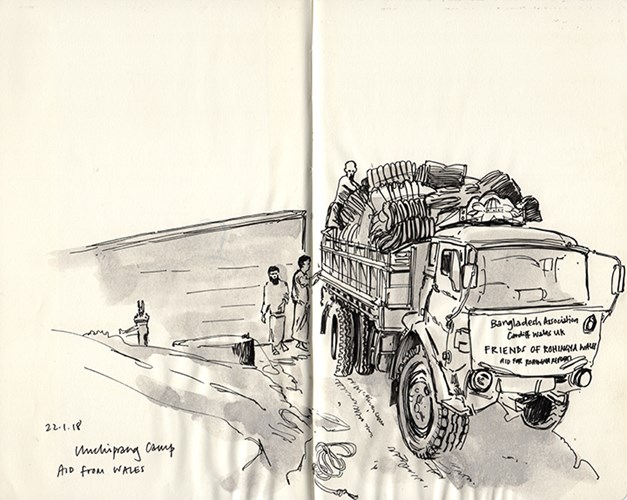 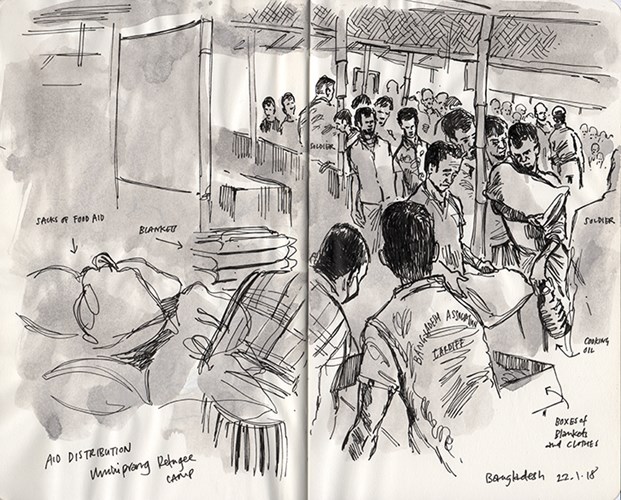 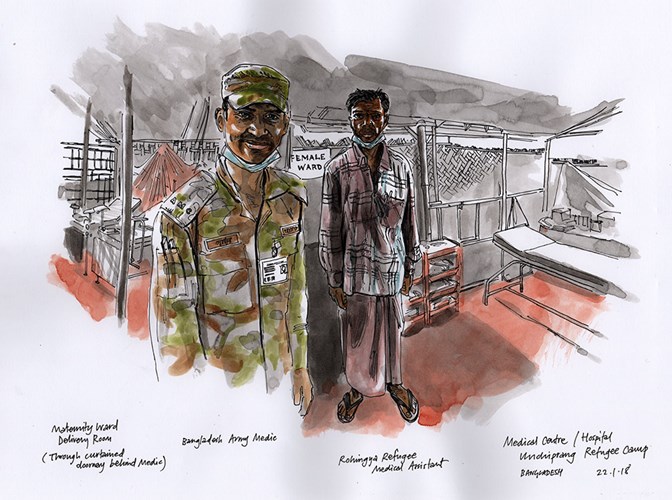 The Unchiprang camp is relatively new. Most of the 24,000+ refugees there are young families. I met a man called Sayesta "Major" Kahn, an ex soldier who now works in the hotel industry and who has personally paid to set up the Medical Centre, the School and an Orphanage for over 100 children. He works as the middle man now, assisting the NGO's like MSF and MOAS to run the services in the camp. He works directly with the Bangladesh Army to run the Medical Centre and aid distribution centre. He introduced me to Fahim. 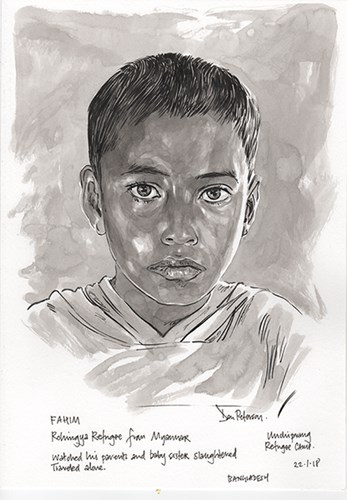 Fahim hid in the jungle as the Myanmar military and civilians burnt his home and slaughtered his parents and younger sister. His story, like all of the other children at the orphanage, is horrific. It's important to understand as well that when I say orphanage I mean a group of military tents with solar lights and some sleeping bags. Major Kahn has provided running water from standpipes next to the school and is building a block of classrooms where the students will get access to remote teaching from teachers in Dhaka.

It's hard to express the scale of the situation. As we drove to Unchiprang camp we passed Kutapalong camp and many others. Literally miles and miles of hillside covered in shelters. There are up to a million people living in makeshift shelters and with the talks about repatriation stalling again and again, and reports of further atrocities every day, it looks like they'll be there for a long time to come. The £40K from the Bangladesh Association in Cardiff was a fantastic amount but sadly just a drop in the ocean and to make things worse the rainy season will be here in a few months. The Logistics Coordinator from MOAS explained that their biggest concern now is the likelihood of many of the shelters simply washing away in flash floods and mudslides due to the extensive deforestation caused by the refugees who are simply trying to survive.

This is why I am trying to raise a little more money and hopefully you can help and make a donation or, if not, send a link to this page to someone might be able to. I'll make sure the money gets directly to Unchiprang camp. 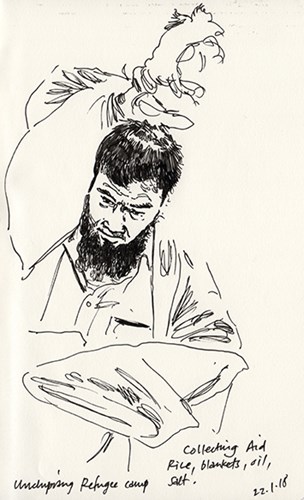 You will not have failed to notice stories of the Rohingya Refugee Crisis that has effected the lives of hundreds of thousands of people from Myanmar, officially the Republic of the Union of Myanmar, in South East Asia.

Refugees are living in makeshift camps in neighbouring Bangladesh with more making the perilous border crossing every day, some 2,000 in just the days between 26th and 29th of October. The Rohingya people, described by the United Nations in 2013 as one of the most persecuted minorities in the world, are predominately from the Rakhine State in Myanmar and are fleeing violence which has flared up there since the end of August.

The refugees arriving in Bangladesh are mostly women and children suffering trauma and injuries caused by gun fire, shrapnel, landmines and fire. They report fleeing as their villages are burned down, parents and relatives gunned down in front of children and women and girls being raped and brutalized. The UNHCR, the United Nations Refugee Agency, are working to record these appalling violations of human rights, to register new arrivals and to provide comprehensive protection services. By 28th October, for example, the Bangladesh Government Social Services Division has identified and registered 22,484 orphaned children.

Even before the current escalation in violence towards the Rohingya people in August last year, well over 200,000 Rohingya from Myanmar, probably many more, had already arrived in Bangladesh. This means that with the added arrivals since the end of August aid agencies are currently looking to provide assistance for over 1.2 million people. The current numbers have overwhelmed the basic services that the Bangladesh authorities, with the help of NGO’s and Charities from around the world, are trying to provide. Services such as water, health, shelter and sanitation. The conditions in the camps are so poor right now that outbreaks of life threatening disease were almost inevitable. Diphtheria is rapidly spreading in camps in Cox’s Bazar. As of 11 December, some 550 suspected cases and nine fatalities had been reported. A vaccine campaign has begun and a specialised team from WHO, working with the Ministry of Health, in Bangladesh, and which includes an NHS Emergency Medical Team from UK Aid, is spearheading the response.

All this suffering is the reason the Bangladesh Association in Cardiff decided to hold an event on the 8th November 2017. Bangladeshi restaurants and takeaways from Chepstow to Bridgend have given 50% of their takings, from that evening, to the refugees with the help and support of the Bangladesh UK Environmental Foundation, BUEF.

Bangladesh Association Cardiff members will oversee and observe the spending of the money raised to ensure it gets to the most appropriate areas. They are already in contact with local Bangladesh civil servants on the ground working in the refugee camps.

Ana Miah, Managing Director of the Juboraj Group of Restaurants, and member of the Bangladesh Association Cardiff, says, “As members of the Bangladesh community in South Wales we will make sure every penny raised is used to help the Rohingya Refugees who have, and are still, suffering from these horrific attacks which have forced them from their homes in Myanmar.”

“We will be supplying food parcels, blankets, shelters, water pumps and baby food. Over 40,000 babies will be born in the camps over the next 6 months alone.”

Ana is working alongside Cardiff Councillor Ali Ahmed to make this happen. Councillor Ahmed said, “It is vital at this time that we work together throughout the communities of South Wales, and the rest of the UK, to raise awareness of the situation and to raise funds to support the work of those providing care and assistance to the Rohingya people.”

The evening raised over £40,000 and orders for the life saving equipment and supplies have already been made. In January a team will be visiting the camp at Cox’s Bazar to make sure the vital supplies reach those in need.

Mr. Kaptan Miah, Chairman of the Bangladesh Association Cardiff said, “We are tremendously pleased by the response. It looks as though we have raised an amount beyond our expectations.”

So – where do I come in? I have worked with Ana Miah and Ali Ahmed to make the evening as successful as possible by providing graphic services. It now time to highlight the work of the aid workers and the needs of the refugees in Bangladesh. The Bangladesh Association Cardiff and the BUEF is taking me to Bangladesh during their visit where I will speak to the workers and the refugees and draw images of life in the camps. I am a practising reportage illustrator and have produced illustrations with the British Army in Afghanistan and the Royal Navy rescuing refugees from the Mediterranean. These drawings have been published in the press and online and used to highlight the work of the armed forces. The images from Bangladesh will be used to highlight the need for more funding for the Rohingya refugees. There will be exhibitions in the Welsh Parliament and in Westminster as well as across Cardiff (and anywhere else that would be interested in hosting one!).

The United Nations Office for the Coordination of Humanitarian Affairs (OCHA) says that without adequate funding the services needed to deal with the scale of the crisis cannot be delivered. Any money raised via this page will be used by people from the Bangladesh Community, here in the UK, via the BUEF, directly to the refugees in Bangladesh.

I have set up this Just Giving crowd funding page as the BUEF is not currently a large enough charity to establish themselves on Just Giving.