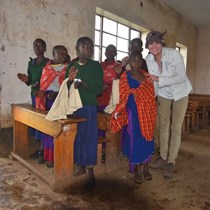 The School is situated in the highlands of Ngorongoro, the National Park in the northern district of Tanzania an area of the highlands that are extremely exposed to the elements. Wind, rain, thick foggy clouds and freezing cold spell at an altitude of 8000 feet above sea level makes it really extremely challenging for the children to attend school. Not only do they have to face the elements, but the journey to school and back home to their humble African huts situated in the wilderness African bush is as dangerous as it may come. Lions, Cape Buffalo, Leopard and herds of Elephant frequent the areas on a daily basis and can all potentially harm the kid’s as they journey through the bush on foot, in some cases up to 16 miles a day facing the danger every day. The majority of the pupils at the school are from the local Masai tribe, who are all pastoralist who mostly live off the land. Nutritional diets are at the best of times, almost absent, and many suffer from malnutrition as a result. But yet, having seen and met these children, they all share one common aspect, and that is happiness. Never is there a moment of great sadness, or at least, it's hardly noticeable. However, one very sad fact I did discover, even at school, the children still seem to be short of food. In 2015, the world food aid (WFP) funding stopped operating in the area, and as a result, food supplies to the school were immediately withdrawn as the sponsor seized to operate. This now meant that the children had no hope of having even a basic meal at school either. I was saddened by the thought that most were feeling hungry whilst trying their best to concentrate in class. Imagine trying to cope with school and being hungry at the same time? It dawned upon me that the concept of education and learning was null and void if attempted on an empty tummy. Our aim is to raise a minimum of £2500.00GBP (approx. 7 190 169,641 TZS) in support of the primary school kids so that they can have one meal a day.

Supporting children in two schools in Tanzania Building new infrastructure for the communities in the town region of Ngorongoro and Karatu.