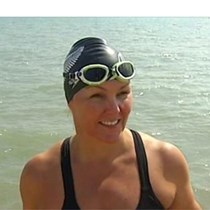 On 15 August 2016 Tracy Clark will swim around Manhattan Island and Roger Finch will, 5 days later on 20 August swim the Boston Light. Ros is an amazing woman who has inspired both of us. Here is her story....Born in 1952, I contracted poliomyelitis or Infantile Paralysis when I was 6. 3 years ago I was diagnosed with Rheumatoid arthritis in my hands. I use a wheelchair but pride myself on independence. I’ve had a full-time jobs as a museum curator until increasing disability recently forced me into early retirement. I’m on my own so don’t have the back-up of a partner or family. My mother taught me to swim when I was 8 but until I came to Portsmouth I hadn’t had any coaching or took it seriously. I loved living near to sea and began open water swimming. I have completed many open water swims but the English Channel I could only dream! I was honoured to represent Great Britain in all European and World Championships between 1994 and 2001.I also competed at both the Atlanta and Sydney Paralympic Games. Between 1995 and 2001 I broke 8 world records, one of which I held for 12 years! I did 2 Channel Relays in 2006 and 2007. In 2008 my solo English Channel dream seemed to be within reach. It began well, however, a nagging pain in one shoulder became a massive focus of pain, the cold began to seep into me and recurrent sea-sickness made me desperately want to stop it but I was determined that I shouldn’t be the one to end it. After 25 hours and 14 minutes my crew fished me out. Totally exhausted and nearly unconscious and only 0.7 miles off the French coast! I couldn't make any further progress, I had nothing left. It took over two months to recover. In 2009 I was back, support and encouragement from my friends in Channel swimming as well as my own determination fuelled my next attempt. On 26-27 September I took 20 hours and 17 minutes to swim the English Channel. For the first time I feel 'disabled' due to the disrepair of my current wheelchair. Thanks so much!