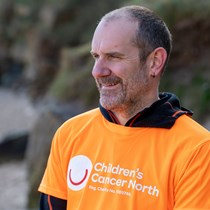 Weʼve raised £8,322 to fund much needed research into Childhood Brain Tumours, in memory of my son Lochlan who died of a High Grade Glioma last year.

Marske by the Sea
In memory
Funded on Thursday, 4th August 2022

On the 24th of June this year, myself and Andrew Hebden will be undertaking a fundraising charity run in memory of my son, Lochlan, who died on the 2nd of May 2021, aged 8 years old. We will be running to raise much needed funds for both Brain Tumour Research and Children's Cancer North, two charities which are very dear to my family's hearts.

My son, Lochlan, was diagnosed with an incurable High Grade Glioma Brain Tumour in July 2019, when he was just 6 years old. He underwent urgent surgery at the Great North Children's Hospital in Newcastle, after a brief illness in June that same year. After one week in the paediatric ICU unit at the Great North Children's Hospital, Lochlan returned home and spent some time recovering before beginning 6 weeks intensive daily radiotherapy in Newcastle at the Freeman Hospital. Unfortunately, during this time Lochlan experienced some complications and began having associated seizures, which meant he started Radiotherapy earlier than planned. Once radiotherapy ended Lochlan then began a planned program of 6 cycles of oral chemotherapy. Lochlan managed to handle this treatment, which historically is designed for adults, very well. And his medical team decided to extend his treatment to 12 cycles (12 month's worth). Unfortunately, when he reached the end of cycle 12 there were no other treatment options available and we went into a period of 'watch and wait' for 6 months. However, after 3 months it became apparent that Lochlan's health was deteriorating and his MRI scan confirmed that his cancer had spread to new areas of the brain. There was no further treatment options available for him! We were heartbroken, again! Throughout each step of his journey we were always told to expect the worst, but at each point Lochlan showed his true colours, bravery and courage to overcome every hurdle that was in front of him, consistently exceeding all medical expectations.

Hopefully the above has explained a little of what this run means to me and why we are doing it. Now to explain the significance of this journey. We will be running from my family home in Marske by the Sea to the RVI Great North Children's Hospital in Newcastle, where Lochlan was under the care of the Dr Rebecca Hill (Andrew's fiancé), Consultant within the Paediatric Oncology Department and the CYPOONS nursing team. This will be a journey of approximately 53 miles. The route and journey chosen is particularly poignant because it is the same journey we made as a family on a monthly, weekly and sometimes daily basis for Lochlan to undergo his treatment and care n Newcastle. Coincidentally our route will take us close by Lochlan's resting place (which will actually mark the half way point on our route). Should we be struggling or needing any motivation to push on and reach our goal. I am sure Lochlan will be around us, cheering us on.

The charities need our help! We need people to know!

Children’s Cancer North is an independent charity with over 40 years of heritage in supporting individuals and families affected by childhood cancer. Newly formed in 2021, from the marriage of North of England Children’s Cancer Research and Children’s Cancer Fund, our charities have collectively raised over £40 million to support children with cancer in the North East and Cumbria since 1979.

Thank you for visiting my page. I do hope that you can find it in your heart to donate and spread the word, to aid the fight against Brain Tumour Cancer. In memory of our beloved son and brother Lochlan!

Marske by the Sea