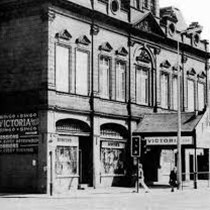 In 1900 the Victorian age was at its zenith and on Great Clowes Street in Salford, Broughton Theatres opened their newest creation: The Victoria Theatre. They engaged the eminent theatre architect Bertie Crewe (who trained under reknown architect Frank Matcham) to build a producing house for opera and Shakespeare: high ideals indeed! He created an opulent theatre with an imposing terra cotta façade and an ornate interior on three levels: stalls, dress circle, rear circle and balcony (always known as the gods), with four stage boxes, rather better for being seen in than having a good view of the stage! The theatre soon became a receiving house with a mixed programme of touring musicals, variety and music hall.

After various incarnations as a bingo hall, the building was put up for auction back in September 2018 and, after not selling initially, was snapped up by a local private developer who has experience with other heritage sites. The new owner heard about our cause - since 2016 - to seek to save the theatre and restore 'Salford's Sleeping Beauty' to her former and ultimately original glory. We were delighted to have been approached and have subsequently been given the opportunity to commission a viability study, to go alongside an existing business plan, to prove our vision, with the help of Theatres Trust, local stakeholders and the community in the immediate vicinity. We successfully ensured that the site was awarded Grade II listing and have kept an eye on it throughout our existence.

We have recently appointed an expert consult team and the process of the viability study is underway. Despite engagement and promotion through various channels, success and progress does not come cheap or freely and we have been lucky enough to earmark some funding for the study, however we do need your help to gather a Fighting Fund in order to secure, preserve and protect the building, continue our back room work around keeping the cause and spirit alive, as well as getting out and about at local events to raise awareness and network. the condition of the interior is deteriorating and we simply need to act now before we lose more treasures elements of this great grand piece of history that we are discovering holds more rare components of the original Victorian theatre that is once was, and could be again.

Any support is greatly welcomed, no matter how small, and please check out our updated (and sign up to keep informed) at salfordvictoria.co.uk

A group dedicated to the promotion, and ultimately restoration, of the Victoria Theatre, Great Clowes Street, Lower Broughton, Salford