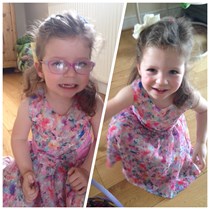 Jasmine was born alongside her twin sister prematurely. She suffered a bad brain heamorige. The first few months of her life she suffered terribly, she had severe fits and was taken to UCLH intensive care. She couldn't breath for herself and was undergoing scary and painful testing.
During the course of her stay she developed hydrocephalus, this basically meant that the blood had blocked her cerebral fluid from flowing normally and was causing her head to swell, adding more pressure to her already damaged brain. She had to undergo lumbar punctures every other day to relieve the pressure on her head.
On top of that she developed suspected meningitis and was put on heavy medication.
We were eventually told the devastating news that Jasmine had diaplegic spastic cerebral palsy. This would result in Jasmine never being able to walk and struggling daily with things most of us take for granted. We were told she would never feed, talk, sit crawl or smile.
It was devastating news, but we were so relieved that our special baby was ok that we took it in our stride.
Jasmine has since smiled, eaten normally (with help) and spoken non stop. When she turned 15 months she sat up and the day after her second birthday she managed her first crawl! She was defying all odds.

This leads is nicely into today. Jasmine is so strong and so determined, she is now desperate to walk, something she won't be able to do without an operation called selective dorsal rhysotomy. A procedure that identifies nerves causing the spasticity and cutting them.
She was meant to be having this done on the nhs but they have since cut the funding leaving us with the option of her not walking or raising £30,000. We raised it!! She had the operation Donetsk the beginning of April, we are now trying to get as many physio sessions as we can to aid her progress.