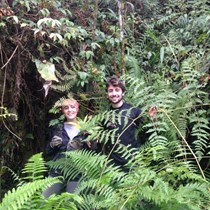 After moving to Samoa at the end of September 2018 to begin internships with the United Nations, we stumbled upon an irresistible opportunity we couldn’t turn down.

You’re probably all thinking… who are they? So, let us introduce ourselves!

Hello! I’m Monty, born and raised in the UK. I have recently graduated from the University of Reading with First Class Honours in BSc Ecology and Wildlife Conservation and successfully applied for an internship here in Apia, Samoa, to work with the Global Environment Facility (GEF) Small Grants Programme (SGP). It is implemented by the United Nations Development Programme (UNDP) to provide financial and technical support to communities and Civil Society Organisations with the overall aim to safeguard our environment. I have always had a passion for hockey, competing at Junior International Levels for England U-16 and U-18’s back in 2011-2014, and whilst studying my degree I played for Reading HC 1st XI in the UK, winning two National Cups in my three years at the club. It was due to this that when I arrived in Samoa, I got in touch with the Samoa Hockey Federation (SHF), and here I am now, Head Coach of the men’s and women’s squads. Over and out!

Hola! My name is Marina and I’m Spanish from head to toes. I studied BSc International Development at the University of Reading, graduating with First Class Honours in July 2018. You may be wondering if I met Monty at University…and no, the gossip is he’s my high school fling and have remained together since. Anyway, I moved to Apia, Samoa, to pursue a career within the development field, working with United Nations Environment Programme (UNEP) on governance and coordination amongst involved stakeholders, partners and Member Countries. After over 5 years with Monty, I still don’t know the rules for hockey and have never ever had a hockey stick in my hands, but my networking and communication skills made me the perfect candidate to become the Secretary-General of SHF. Although my main contribution as an intern is on ocean-related projects, I am also in charge of the media and communication set-up for this newly-opened sub-regional Office, so I guess this has come in very handy!

WHY DO WE NEED YOUR HELP?

After meeting with the SHF President, Mr Faamausili Taiva Ah Young and the SHF Vice-President, Mrs Peta Maulia-Teo, it immediately became apparent the drastic lack of support and funding on hockey by the government, sports committees and sponsors. Hockey is therefore far from being a priority as other sports like rugby or basketball are in Samoa, to the extent that it has been removed from the 2019 Pacific Games that will be played ‘at home’ in Apia. This is because SHF have lost their training ground as UN agencies have been relocated to their former complex, which is now fenced off and to which we are not granted access due to security purposes, and the little equipment they have is either broken or on its last legs after having to train in two conceded cement tennis courts at a school, which are no longer available to us either. For a sport that is eager to develop and grow, and in order to be able to compete and be recognised nationally, regionally and internationally, we kindly ask you to lend a hand, in view of the government and other financial institutions turning their backs on making this dream a reality.

WHAT WILL YOUR MONEY PROVIDE?

With the Oceania Cup, an Olympic qualifying event being held in Queensland, around the corner (next October 2019), our aim is to provide both men’s and women’s squads with the best preparation possible for them to compete for an Olympic spot. This includes: providing them with updated playing kit and equipment – sticks, shin pads, shoes, gloves, etc. –, through partnerships with Young Ones and Adidas Hockey. On top of that, money will go towards securing a permanent training ground, and ideally, the construction of an artificial pitch (aka AstroTurf). Hockey is already being taught in schools and we believe that with your help, we can together steer the potential of talented Samoans and reverse this government-labelled ‘minor sport’ into a widespread, popular and prevalent sport.