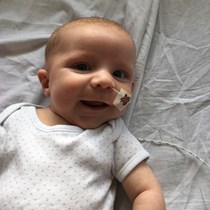 It was both Mark and Jayne’s dream to be parents, but this was a challenge for them as they were unable to conceive naturally. After many years, IVF/ICSI was the only option.

Miracles do happen and George was born on the 2nd October 2017, Jayne, Mark, family and friends were over the moon on the arrival of a gorgeous, happy, smiley baby boy.

George passed all his 6 weeks checks and Jayne and Mark were preparing for their first Christmas as a family. Sadly, at the beginning of December, George contracted a virus and was extremely poorly, he struggled to eat and was struggling to breathe, so, George was taken to A&E for routine tests and an IV course of antibiotics.

It was during this time that consultants became concerned about George’s muscle strength, George was still struggling to swallow and drink which prompted consultants to test George for SMA Type 1.

SMA Type 1 is the most severe form of SMA. Sadly, without intervention most children with SMA Type 1 rarely survive beyond two years of age.

Spending Christmas and New Year in and out of hospital , Jayne and Mark waited some agonising two weeks for the test results. On the 4th January the results were in and Jayne and Mark received the devastating news that George had the genetic disease SMA Type 1.

Left to digest this heart-breaking news over the weekend, they refused to accept this without a fight! George was special... another IVF miracle! Science created George and Jayne and Mark are determined that science will save him!

Please help Jayne and Mark raise money to fund major lifestyle changes and the necessary treatment and equipment for George that will help prolong his life!