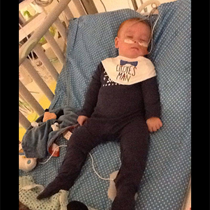 Alfie Evans is our 2 year old son whom was a patient at Alderhay Hospital in the PICU. Alfie was suffering from epilepsy, or constant, chronic seizures.

Alfie was born healthy and on time. He was discharged after 3 days and from there our wait was over. We finally had him with us going home, our beautiful boy. This was a day we looked forward to for 9 months. He grew and fed well, but didn't meet milestones. Alfie was a very sleepy baby who loved his sleep and when he was awake he was an agitated baby.

After a couple of weeks we noticed he wasn't doing things he should e.g lifting his head up,looking at us for more than 20 seconds,grabbing his dummy,eating his hands,making gaga noises,etc. We also noticed he was doing a jerking movement with his hands, arms and legs and eyes would roll up. He always had his hands clenched into a fist too. He just didn't do what he should of been doing so Kate took him the doctors, overall three times, and doctors said he was lazy and a late developer.
Months went by and Alfie went backward instead of forwards. He started making more jerking movement and wasn't himself at all! This went on until Alfie got a chest infection. The infection led him to have a myoclonic jerking spasm.

This is when he was first put on life support. They told us in the new year that Alfie wasn't going to make it so we had him christened. We thought we were going to lose our son!
But Alfie had other ideas, he managed to beat the infection and start breathing on his own. He came off the vent in March and was on cpap. He was moving and trying to open his eyes!

Unfortunately back in december 2017 AH decided that they did not want to treat Alfie anymore and took us to court. After a lengthy 3 month battle were we tried to appeal to the highest courts even the POPE got involved they decided to turn Alfies machine off against our wishes saying he would die within minutes.

Alfie fought on like a true brave warrior for 5 days and gained his wings on 28/04/2018 and left us totally shattered.

We dont want any other family going through what we have so we are hoping to use this money to open a foundation to help other families of UNDIAGNOSED and ILL children to get the help they need.

Alfie is our amazing son whom lost his battle 5 days after getting his life support machine turned off after a lengthy court battle to Keep him alive. We are Alfie's voice and will continue to search for answers for future families going through what we did.