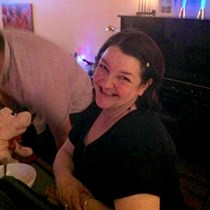 This one is dedicated to my late cousin Steph who was unlawfully killed in France earlier this year, so if you would like to donate a little something in her memory then I'm raising money for Women’s Aid Orkney, who support women, children and young people who have survived domestic abuse both now and historically

In early August a minor illness took me to the GP. He asked me what I did for exercise and I was embarrassed to admit it was next to nothing. After making all my lame excuses I realised I was going to have to do something about it, so on August 19th I dug out an ancient swimming costume and made the walk of death between the changing room and the pool.(I’m very self conscious about my body, but it turns out most people I talk to are, even women with bodies I aspired to having said they hated themselves in a swimsuit) I swam 20 lengths. Then I went back the next day and did 20 more. My aim was to swim 3 times a week but I ended up going every morning before work and added a couple of lengths on every week. Skip forward two months and I have swum 40 lengths every day this week completing 1344 lengths by this morning, which is 21 miles or the equivalent of swimming the English Channel (but without being covered in goose fat and encountering jelly fish)

I was so proud of my achievement I cried! and that’s why I’m shamelessly bragging. My muffin top is not quite so muffiny, there’s some air gone from my spare tyre, I've mastered the art of putting on trousers while standing on one leg and not dangling the other trouser leg in the wet floor, and the breeks that were cutting me in two recently, so badly that I had to go to bed early as an excuse to take them off, are now a comfortable fit. My blood pressure has come down by about 10 ummm notches or numbers or what ever you call it. (This is not confirmed by the GP but by an iPhone app thingy which is good enough for me) and I definitely have less chins. I feel so much better on the inside and it’s not only done me good physically but mentally too. People say I have an inner glow and I don’t think they’re talking hot flushes. *sounds motivation cliche speech klaxon* I’m telling you this to prove that if a totally inactive nearly 48 year old like me can drag their sorry backside off the couch then ANYONE can. I’m not saying you all have to turn into overnight mermaids, but you can do a little something, even it’s just making a start. If you’d told me at the beginning of August that I’d be swimming 40 lengths by mid October I would NEVER have have believed you. I was a classic ‘I can’t’ but it turns out I can!

In other news I’m still in love with chocolate, and tonight I plan to celebrate my achievement by laying on the couch this evening and acting like I’m sponsored by after eight mints. I think I’ve earned it. You may now call me Ariel 💁🏻 *flicks tail*