Weʼve raised £945 to help Abdulrasak Alabi finance his Kidney transplant operation as he has been diagnosed with adult polycystic kidney disease.

Rasak Alabi is a highly spirited young man who has many ideas and ambitions to conquer the world while studying his beloved course in University of Ilorin, as a Statistician.

On graduating, he had a stint as a manager for a print paper distribution company based in Lagos. While working there he had numerous achievements, one of which was getting married to his desired lady. The marriage has produced two loving kids.

Afterwards, he decided to pursue his heartfelt desire of teaching his beloved subjects to the younger ones. It was during this period that he started feeling strange pains which led to the discovery that he has an advance stage Kidney disease by Lagos State University Teaching Hospital. 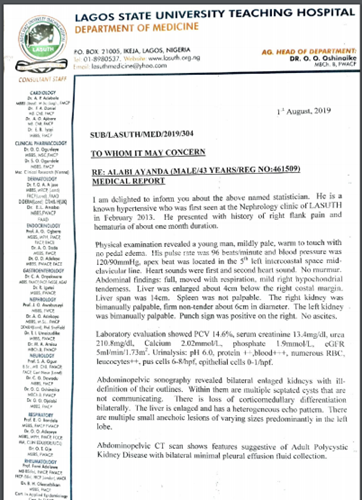 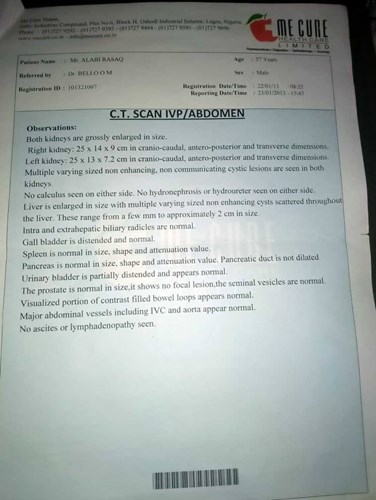 His treatments, until this date has been sponsored by family and friends. But, at this stage, the fund required is 10,000,000 naira and REQUIRED urgently as recommended by Lagos State University Hospital (see the photos attached)

We the entire family and friend of Rasak Alabi, now bedridden) are soliciting for your support to enable us finance his Kidney transplant operation in Nigeria. In Nigeria, medical treatments are financed by the individuals; therefore not available to the less privileged.