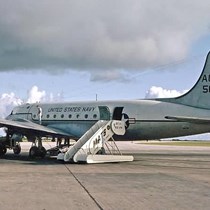 Weʼve raised £1,010 to To secure funding for the preservation and restoration to flight of this rare WW2, Korean, Vietnam veteran Douglas C-54 Skymaster 56498

This rare surviving aircraft was delivered to the United States Army Air Force in 1945 as C-54D-1-DC (42-72525) and immediately transferred to the United States Navy as R5D-3. It was later converted to a C-54Q in 1962 (56498) The aircraft was retired in 1972 after 30 years’ service during WW2 , Korean War and the Vietnam War. We have evidence of the aircraft being based at Naval Air Station Agana on Guam, Hawaii and Iwakuni in Japan. She took in vital live blood for wounded soldiers, supplies and operated in the Pacific theater from 1945 to 1972. She was sold to the agricultural industry in 1977 for carrying out aerial spraying operations. Eventually sold in January 1996 when the registration was transferred to Atlantic Warbirds Inc. of New Hampshire. A $500,000 restoration was carried out and the aircraft together with another DC 4 were flown to England to feature in a film about the Candy Bombers that operated out of England during the Berlin Airlift of 1948 & 1948 taking in much needed aid, food, clothing and fuel to the starving population of Berlin who had been surrounded by the Russian Army. Sadly the film was cut and so there was no longer any use for the two DC4's that flew in to North Weald in Essex. Both aircraft were purchased and over the years had periodic engine runs. Sadly the sister aircraft was cut up in December 2015 and sold for scrap. The cockpit was salvaged and is now owned by a private museum.
We have secured this aircraft and we need all your support to now restore the aircraft. A survey has been carried out by a top engineer and the opinion is that she can be returned to flight and is worth saving ! The aim is to raise an total of £350,000 to get her airworthy. She will be operated and tour the UK airshow circuit and tour abroad as a visiting classroom.We want people to have a hands on visit and climb on board and see, feel and smell what this old work horse is really like. Updates can be found on the Facebook page 'Save the Skymaster'

An avid aircraft enthusiast, pilot and broker of aircraft sales with a focus on Classic and Historic types. A passion for history of WW1 , WW2 and current.