Jonathan was one of the fantastic Snow Heroes involved in saving people during the Beast from the East storm.

From saving those stranded in the Beast from the East storm, to saving cats up trees, Jonathan Court has a local self made small business after serving in the Military. He cares for the local community and tries to help where ever he can.

For example, he wasn't just out all hours in the freezing conditions of the Beast from the East, pulling cars out of drives and local roads, he was driving doctors and nurses to work and even helping people get their medical prescriptions when they needed them the most.

On the 11th April at 1pm, Jonathan and his two co workers stopped next too a Industrial Estate catering van to grab lunch when two young males pulled up the opposite of Jonathan's truck, out of eye shot, and broke in and ruined his livelihood, by stealing his tools which are crucial to running his business. Without them he simply cannot continue. 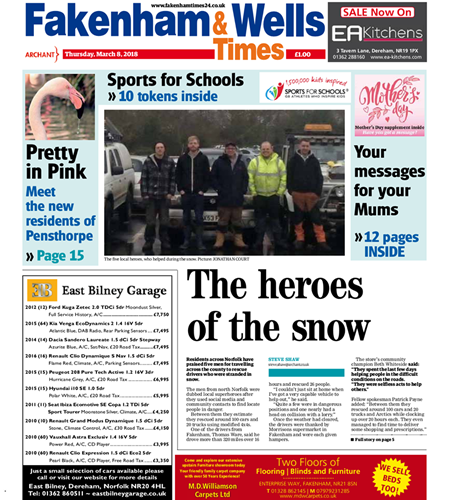 Jonathan has recently had a very bad spell of luck, from injuring his leg so was unable to work, to having an accident in his Land Rover just a few weeks ago, and he even had his truck vandalised since helping after the storm.

Unfortunately, Jonathan, as many tradesmen do, he'd modified and hand built some of the tools stolen making them void on an insurance claim.

We are asking anybody, businesses, parents, the locals that he had helped to get involved and pay it forward.

Thank You, literally anything will help.