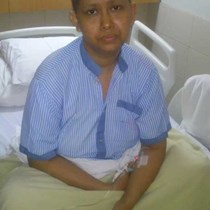 Hi, my name is Simon Phan.

I am here to raise money for the continued care and cancer treatments for my sister-in law.

Her name is Nahid and is 26 years old. She is happily married with a 7 year old son, something a normal human could wish for.

Everything was going according to plan until 2015, where symptoms of a cancer began to develop (not knowingly to her). Coughing, chest pains were disregarded as having a flu or short term illness and we often say to ourselves, "Let's just have a medicine from the pharmacy and we'll be ok in a week". However, this illness began to prolong for months, and was now to her attention it could well be more than a simple flu.

Having had multiple scans, she was diagnosed as having a high-risk metastatic disease (Choriocarcinoma, now at Stage 4 out of 4! which had began in the womb and developed its way through the body into the lungs and brain) in early 2016. It is a very rare cancer which affects 1 in 50,000 pregnancies.

She is currently in Tata Memorial Hospital where she is undergoing Chemotherapy, being treated with EMACO (etoposide, methotrexate, actinomycin, cyclosporine and vincristine) every 1-2 weeks..! Treatment runs into the 4-digit figure in pounds for EACH treatment... Something her husband has been providing for from day 1 but obviously his bank account isn't unlimited and he intends to sell his house to fund the rest of the treatment (which will not cover the full treatment which lasts 5 years). Being a 26 year old she has a long life ahead of her, many adventures uncompleted and a much required task of being a mother to their son. However, she may not be able to fulfill anything if she does not continue with the Chemotherapy treatments.

Hence we ask for support and donations to allow them to have a family, a mother, a friend and allow them to keep a roof over their heads.

Please share with friends who would able to help. We are forever thankful for any support, whether big or small.

A normal person aiming to raise money to save a life