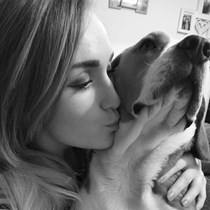 Chibbs is 2 years old and is currently in a lot of pain with hip dysplasia. He was diagnosed last year, however the vet believed he wouldn't require a full hip replacement until he was around 6 years old.

Fast forward to now and Chibbs has gone downhill quickly. He's on strong painkillers, however they aren't doing the job. He's extremely lethargic and can't walk very far before he gets tired. Our vet believes it will be kinder for us to have him put to sleep in the next couple of weeks.

Our previous insurance company (who we were with when Chibbs was diagnosed) won't pay out a penny for his hips as it is a genetic condition and his parents should have been tested before breeding. Now as it's an existing condition no insurance company will pay out.

As we have just had a baby and are currently in the process of buying a house we can't fund the operation ourselves as it costs around £5000 per hip.

In a final hope to save Chibbs' from being put to sleep I'm trying to raise enough money for his operation. It's a long shot and we will need a lot of help getting word out, but I can't not try.

Any money we raise will be donated to Beagle Welfare if it's not enough to fund his operation.