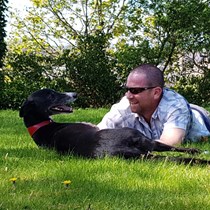 Weʼve raised £805 to West Lakes Squirrel Initiative who desperately need new cameras and food for their feeders to monitor and help the Red Squirrel population.

Steve Tyson, Peter Armstrong and the volunteers at West Lakes Squirrel Initiative (WSLI) are the unsung heroes of our woodlands.

For the past five years, the initiative has headed up the battle against invading Grey Squirrels. Since their introduction to the UK, the Grey Squirrel has decimated the native Red Squirrel numbers to the point where only a few small pockets of reds remain.

Cumbria has long been known as one of the last havens for the red population but according to Peter, that could change if there were no volunteer groups: “If we were not out actively removing Grey Squirrels every weekend, the reds could be gone within 5 -10 years. Grey squirrels have spread into Cumbria and the Red Squirrel’s future is dependant on assistance from the volunteers.”

The grey invaders carry the pox virus which causes severe mortality in Red Squirrels without any symptoms in the greys. Squirrel pox can wipe out 80 to 90% of a Red Squirrel population in less than a month, which can leave smaller and more isolated woodlands without breeding pairs to repopulate.

The WSLI use feeders to monitor squirrel populations, each feeder costs around 100 pounds a year to maintain. Priority is given to feeders where both species are present because if only one grey carries the pox virus it will wipe out nearly all the reds it comes into contact with. Cameras go into some feeders and they are expensive, they also break and sometimes they get stolen.

Cameras and the correct feed are essential to help protect our reds. A small donation can help the WSLI protect the Red Squirrel. With species facing extinction all over the world we can do something for one of our own. We can give a gift to our children and future generations.

The WSLI are hoping to buy a number of new cameras to monitor squirrel numbers and also specialist feed which can assist indicating the presence of greys when no camera is present. They need to help them to save our native Red Squirrel population.

I'm a writer at the Cumbria Guide who felt compelled to set up this page to help the volunteers at the West Lakes Squirrel Initiative after I had a chance to speak with them. It's a tireless battle to save the Red Squirrels and the desperately need all the help they can get.