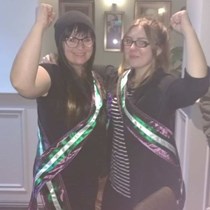 Recently South Yorkshire Women’s Aid (SYWA) were made aware that there would not be the same funding to bid for after their initial funding runs out in December and that in fact there would be no money for the service at all.

SYWA are running off an initial funding grant from Doncaster council of £30,000 which started in January of this year. This is a small pot of money which doesn’t stretch very far, but the 3 part time staff, trustees and volunteers work very hard to make it a service which can support women within Doncaster and the wider South Yorkshire community. The work they manage to do at the service is life saving and live changing. They provide supportive advice and therapeutic courses which give women back control and confidence in their lives.

Since settling into their new office in late march they have had over 100 referrals for their programmes. They are inundated with referrals for advice, both from council agencies and self referrals. Over half of the core service provision hours are done voluntarily and they struggle to pay rent on their single room office.

Apart from South Yorkshire Women’s Aid, Doncaster council provides a skeleton domestic violence service with incredibly limited front-line staff, some who are full to capacity and are not taking on any new clients.

One thing is abruptly clear, domestic violence support needs to be vastly expanded in Doncaster to meet the needs of women in Doncaster and the wider community. What SYWA has been told is that there is no funding for the service from the council to stay open past December. The council have told SYWA that there are no funds for the voluntary sector full stop.

This leaves South Yorkshire Women’s Aid facing the prospect of closure after December. It is hard to secure alternate funding without council funds; funding schemes like the big lotto rarely fund organisations that do not have alternative funding.

This is not the first time SYWA have been in this position, last March the service closed due to lack of funding. However campaigners fought relentlessly to win back funding and re-opened the service.

The closure of SYWA was last year and will be again a devastating blow to women and girls within the community. Without the support of specialist violence against women services, women and girls will remain trapped in abuse, without any service support to help them rebuild their lives. Without specialist violence against women’s services, women die. A woman committed suicide after she lost contact with SYWA when the service closed last year. This is not an uncommon situation, 2 women a week are murdered by partners or ex-partners and a further 5 attempt suicide to escape the effects of abuse, with 3 a week being successful. This puts the death toll at 5 women a week dying directly from domestic violence.

Domestic violence is a massive problem globally, and Doncaster has some of the highest repeat rates of domestic violence and has a higher proportion of high risk cases (high risk meaning severe danger of murder).

This is being done under Jo Miller, the chief executive of the council who claims to be ‘pro women’ and organised a ‘rival’ northern power house conference to one which had few women speakers. Activists from ‘women’s lives matter’, a campaign group started by defending the service last year, do not accept the statement that Doncaster council have no money for this service.

A report by TUSC (Trade Unionist and Socialist Coalition) titled ‘How much reserves do councils have?’, has found that Doncaster has £81.7 million pounds in reserves as of March 2017.

Women’s lives matter and South Yorkshire Women’s Aid do not accept the council’s ‘no money’ verdict and will be campaigning relentlessly to obtain money from the council.

Across the country women and women’s services have been at the front of the firing line of austerity cuts, this is in spite of rising tax’s of the lowest 5th of the population. There are currently not enough services and refuges for women fleeing violence as it is and activists will not allow the only Women's Aid to be lost in South Yorkshire.

The women’s lives matter group will be fighting the discontinuation of funding to SYWA - However we need as much financial support we can get in the meantime to make sure we do not close after December - we realise that this service cannot stay open from public donations but they go a long way and are life saving.