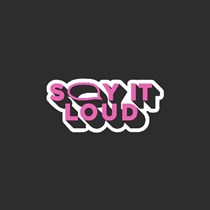 Say it Loud Team is crowdfunding

Say It Loud is an organisation that provides support for survivors of sexual violence for all individuals from the ages of 16 and up. The team are completely voluntary, with the organisation being set up by Meredith in 2020 after experiencing sexual violence herself in 2018.

As well as being a support helpline, Say It Loud also campaign and use their platform to educate others on how to create safe spaces for survivors of sexual violence by teaching them the right language to use, how to respond to sexual violence disclosures and hope to provide a space in which individuals can learn how to make survivors feel validated and heard. We also run a blog. Say It Loud focusses on recovery, understanding your emotions and being in touch with yourself, this is something we reflect within our writing. Our writers typically share a contemporary and new approach to topics such as current affairs and life advice. We encourage a transparent and informed voice, using reliable sources for detailed articles (and balance when it comes to opinion pieces).

As promoters of empowerment, feminism and advocates for mental health, we are huge activists. We’re committed to offering our partners and followers a unique, safe platform - one that’s honest, open and knowledgeable.

Our core values are concentrated around:

Diversity - No matter your gender identity or background, Say It Loud supports all survivors of sexual violence.

Compassion - The Say It Loud team are trained to communicate compassionately and professionally to those who reach out to the helpline. The brand seeks to create a warm and comforting environment for those who come forward.

Non-judgemental - Say It Loud operates on a no-judgement policy, whatever users of the helpline share will be listened to and understood with no judgement. All information shared will remain completely confidential (unless client safety is concerned).

Non-directive - Say it Loud provides a service that is non-directive, meaning the users of the helpline will never be forced, coerced or pressured into making a decision i.e reporting. Say it Loud operates by providing a free safe space that provides support for survivors to make their own informed decisions.

Here at Say it Loud, we are aware of the estimate that 4 million women and 631,000 men have experienced some type of sexual assault since the age of 16 alone and 47%, almost half, of all transgender people have been sexually assaulted at some point in their lives. Survivors of sexual violence may feel unable to reach out for support due to fear of being victim-blamed or not believed. Due to this, a lot of survivors experience suicidal thoughts and/or attempt suicide. For this reason, here at Say it Loud, our slogan is ‘brave conversations save lives’ as we believe that with the right support, survivors of sexual violence can take back their control.

Say it Loud was set up by Meredith Graham in 2020 after experiencing sexual violence herself in 2018. When Meredith reached out for support from her university, she felt that the responses she got were victim-blaming and prevented her from healing from her sexual trauma in a productive and healthy way. Meredith although supported mostly by her loved ones, was also surrounded by friends who made her feel as if her experience was not "bad enough" and was often joked about. Due to this, Meredith set up Say it Loud as she felt that although she sought support for her experience and was eventually given this, she was often told to not speak about her experiences and was encouraged not to. Meredith found that as a society, we refuse to speak about sexual violence as it's a taboo subject and felt this does more damage than good.

"When we encourage victims of sexual violence to not speak up about their experiences, we are telling them that they won't be believed and their experiences were not "bad enough." This causes a huge impact on the survivor - often isolating themselves from others and attempting to avoid their trauma can cause severe mental health issues, physical health concerns, and unfortunately, suicide. I believe that we should encourage and empower survivors to speak about their experiences and to seek the support they rightfully deserve."