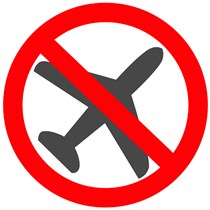 WE’RE TAKING THE GOVERNMENT TO COURT TO...

We all know that flying is one of the most dangerous threats to the climate because of the huge amounts of greenhouse gases pumped out by aircraft. And ask anyone who lives near an airport and they’ll tell you about the terrible noise and air pollution blighting the lives of people and their communities.

Unbelievably, the government’s JET ZERO aviation strategy has given the green light to a huge expansion of flying and airports.

Instead of stopping any expansion of aviation, the Jet Zero plan will actually encourage more flights and bigger airports, which means even more noise, pollution and greenhouse gas emissions.

BUT WE’RE NOT GOING TO LET THE GOVERNMENT GET AWAY WITH IT.

WE’RE TAKING OUT A JUDICIAL REVIEW AGAINST THE JET ZERO STRATEGY.

We want the government to rethink its strategy and instead focus on immediate reductions in greenhouse gases while we still have a chance of avoiding complete climate breakdown.

If we win, we will have radically changed the landscape in which all airport expansion decisions are made. Our victory would help campaigners across the UK and give them real power to fight the expansion of the aviation industry.

We have a brilliant legal team lined up, including a QC and solicitors with huge experience in this area. They have agreed to work for very reduced rates but there is still an enormous amount of legal work that needs to go into making such a claim successful.

We urgently need funds to make sure our team is ready for the David and Goliath fight that lies ahead of us.

PLEASE WILL YOU HELP US WIN OUR FIGHT?

ALL CONTRIBUTIONS BIG OR SMALL WILL HELP.

In July 2022 the government published its so-called ‘Jet Zero’ strategy. It claims that it will make sure that the UK aviation industry reaches ‘Net Zero’ by 2050. But instead of cutting emissions as fast and dramatically as possible in this time of climate crisis, Jet Zero allows them to grow without constraint. This is based on the absurd claim that the increased emissions would be reduced through the future introduction of new technology. But it’s a fantasy – this technology is unproven or non-existent and simply cannot be developed and implemented for decades, by which time it will be too late for the planet and its people.

Jet Zero needs a fundamental re-think and that’s why we’re taking the government to court. We believe the government has failed in its duty to produce a meaningful, quantified and realistic strategy to cut aviation emissions to Net Zero by 2050. Jet Zero needs to be re-written so that it takes real climate action.

· It ignores repeated advice from the government’s own expert climate advisers (the Climate Change Committee) that demand for flying needs to be limited as soon as possible and that there should be no further net expansion of the UK’s airports.

· It relies on new technologies such as electric and hydrogen powered planes and new jet fuels to cut emissions. But climate experts warn these techno-solutions either don’t yet exist or cannot realistically be scaled up in time to stop aviation emissions by 2050.

· It allows emissions from flying to increase into the 2040s, disregarding repeated advice from the world’s scientists that we must cut all emissions in half by 2030 to prevent catastrophic levels of global heating.

What will the money be spent on?

We will have expert legal advocacy from a QC and solicitors with huge experience and a track record of success in planning and environmental law. But this comes at a cost even though our team are working at reduced rates. We urgently need the funds in order to match the powerful government machine that will swing into action to defend the aviation industry and its profits. Please note that none of the volunteers involved in this campaign will be paid. All monies raised will go to legal fees and other incidental expenses.

What is a judicial review?

A judicial review is an application to a High Court judge to review the lawfulness of a decision or action made by a public body, in this case the government. Climate activists have recently had a huge success in challenging the government’s overall net-zero plan at judicial review and this shows that such challenges can really make a difference.

What if the fundraiser raises more money than is needed for the judicial review?

If we raise more money than we need, we will ensure that any extra funds are spent on fighting the expansion of airports or increasing flights in the UK.

Who is making the judicial review challenge?

The Group for Action on Leeds Bradford Airport. GALBA is a group of citizens from West Yorkshire and beyond determined to stop our local airport from expanding. We are part of a national network of campaigns, all fighting to protect their communities and everyone’s climate. Our national campaign against aviation expansion is one of the most important and dynamic parts of the climate movement – and we will win! Find out more about GALBA, why we oppose airport expansion and how to join at: www.galba.uk

Your donation will help us stand up to the aviation industry.

SAY NO TO MORE PLANES

SAY NO TO BIGGER AIRPORTS