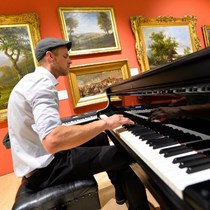 Stoneygate Baptist church, Leicester are looking to raise the necessary funds to repair the Pedal division pneumatic action, which is now 106 years old, and it's components have reached the end of their current lives.
The organ recently received an Historic Organ Listing, Grade II*, from British Institute for Organ Studies (BIOS) . It was decided after a visit by District Organ Advisors (DOA) to Leicester, that this organ was of special interest and importance.
The organ has always impressed, moved, and given people a huge amount of joy, at concerts or services at Stoneygate. As organist, I am incredibly lucky and proud to be organist at SBC.
The plan is to repair this division, so that recitals, when possible, can happen and enable the instrument to pay for further work that is also required fairly soon. The pedal division, has the lowest sounding and longest pipes in the organ. The largest being the velvet toned Violone stop, which sounds like a double bass being bowed! The leather "purses" under the windchests, that supply wind to the pipes, are splitting and thus not working. There are now so many notes not playing that it is affecting the overall sound, and is very noticeable.
The instrument at Stoneygate, was built by Stephen Taylor, organ builder, in Leicester, in 1914. It came out of the same factory and the same year, as it's larger sister in the Demontfort Hall, Leicester. The organ in Demontfort Hall, has a Grade I Historic Organ Listing certificate also and was restored in 1997 by organ builder, Richard Young. And it's Richard Young that has been chosen to complete the repair work at Stoneygate. Richard has a passion for Taylor organs, his father serving as apprentice at Taylor's.
We all love the Taylor organ at Stoneygate Baptist church, and it is important that we continue to preserve this incredible instrument, so that it can continue to inspire at concerts and recitals and lead, with a very fine tone, during worship.