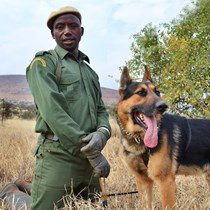 We are raising funds in honor of our dear great friend, the late Commander Lempris of Honeyguide Organization's Anti-Poaching Ranger, Tracker Dog Unit, in Northern Tanzania. Lempris recently died after a valiant battle against a brain tumor. He was a huge asset to the Dog Unit and the first Commander at the outset of Honeyguide Organization’s Dog Unit - dedicated to obstructing the poaching of elephant and other wildlife in West Kilimanjaro, and further afield in Northern Tanzania. Lempris truly has left an indelible mark on all the men he worked with, his devoted family, and his many friends of which I proudly am one.

Lempris was only 47 when he recently died. He leaves behind 7 children and his wife Ann, whose eyes reflect the pain of his loss.

Honeyguide Organization asked me to help manage a fundraising campaign for Lempris children's school fees, and additional finances to assist his wife Ann on their 'shamba' small-holding.

With Ann, he brought up strong and motivated children, who will no doubt make both their parents proud. Both Honeyguide and Photography4Life want to help with this fundraising campaign.

A minimum of £1,500.00 is required to keep the 7 children (2 of whom are pursuing further education and are in their early twenties) in school for the next 12 months. Honeyguide Organization and BigLife Foundation have been exemplary in supporting Lembris and the family throughout his operations and hospitalization. Now they need assistance to support the children’s continued education. We stand united in the belief that in educating Tanzania’s young generation lays the survival of the countries wildlife and natural resources. Whether actively involved in conservation or not; their educated knowledge and views will play a key role.

For more details go to:
https://www.photography4life.org

Check out this page:
https://www.photography4life.org/whos-lembris

Coll Hogg is the founder of www.photography4life.org, working closely with Honey Guide Organization in Tanzania, East Africa. Honey Guide is directly involved in conservation and community development, for which Photography4Life produces ground photo-journalism in East Africa.