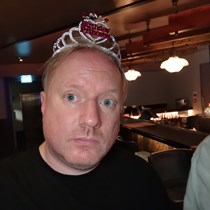 Sean and Jett first met each other 10 years ago when Jett was 4. Sean saw him in his wheelchair and went to say hello, unphased by Jett's disability. Soon he was feeding Jett sausage rolls and so began a bond that would only grow stronger as time went on.

Jett's dad left him at a very young age, but Sean started to quickly fill the gap of a father and began referring to Jett as his son. Whether it was taking him to Diggerland to meet my nephews, going on holiday with him and his mum Jade and the rest of the King's Hill family, helping the good folks at the Make A Wish Foundation grant his wish to take him to Disneyland in Florida, or arguing relentlessly with doctors and healthcare staff to ensure that Jett was always given the best care possible in one of his countless hospital stays, Sean was more of a dad to Jett than many men are to their biological children.

Before he died Sean set up a Just Giving page to try and raise £10,000 for Jett to have a much needed piece of equipment that the NHS won't supply.

One of the complications of Jett's condition is the production of large amounts of mucus on his chest. This is made worse by certain medicines that Jett has to take for his muscle movements which increase his mucus production. The end result of this is that he suffers with extremely serious breathing difficulties.

Recently medical science has developed a vibrating vest, which when worn can loosen the mucus on his chest, enabling Jett to regurgitate it. This in turn means he can breathe more easily, eliminating more complications from low o2 saturation levels, such as pneumonia (that he has had five times already).

These vests are incredibly expensive, and Sean was trying to find the £10,000 to fund it. His last Just Giving page raised £5,747, so we need to raise £4,253 to reach his target and help Sean achieve one last amazing thing for Jett. To finish off something that he started that was very important to him, and that will make Jett's life considerably better.

Thank you to everyone for your help x

My name is Steve. Sean Murphy was my best friend before he was sadly taken from us by a hugely aggressive strain of cancer. As a tribute to this much loved man I want to realise his last goal of raising funds to buy the disabled child he called his son some much needed kit.