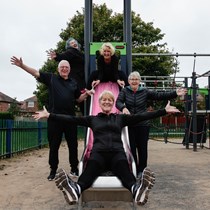 27th June 2022. A crazy busy week rehearsing for our show in Derby on Friday evening. The last few weeks have been difficult for a few of us in the team, but your support helps us keep on going. It helps us keep on touring the show, raising awareness of PD as we go. Thank you! x

8th April 2022 - thanks so much to all that supported us at Chilwell! 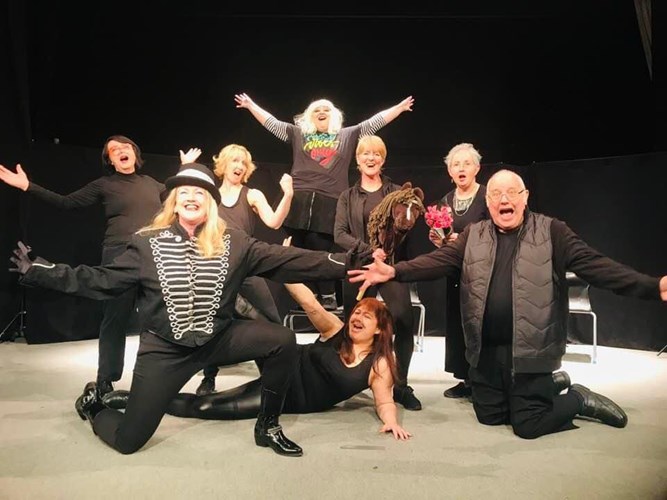 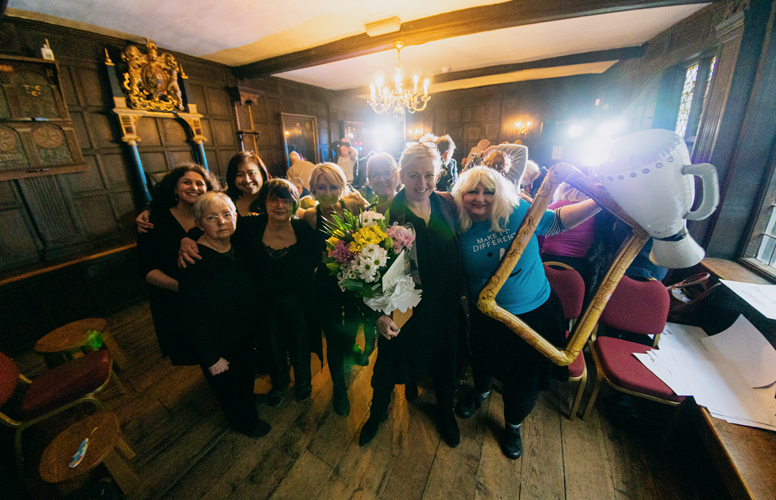 We did it! We successfully performed “Shake It Off” for the first time in front of three live audiences.

Thinking why we wanted to take on this challenge:

1. We want to talk about Parkinson’s in imaginative and interesting ways that get people listening.

2. Those of us with PD are sick of people’s wrong perceptions and lack of understanding of what Parkinson’s is.

3. To raise the profile of Parkinson’s so it gets more attention, funding and support. We have to work harder to find better treatments and ultimately cures.

4. We want to show off what we can do, how creative we are and how much we have to offer as people with Parkinson’s.

5. We want us to disrupt, surprise and shock.

We don’t want to be ordinary, we want to turn something rubbish into something positive with like minded people.

The excitement and fear before the first performance was like nothing most of us had ever faced, but with the support of the cast, team and amazing audience we were lifted to produce a performance no one could have hoped for.

Afterwards we were all in tears, and we can’t wait to do it again. We all felt proud of what we’ve achieved and can’t wait to step on the journey to the Edinburgh Fringe - 25th, 26th, 27th August 2022.

Please help us on our journey, performing, educating and entertaining. More details on our Facebook and Twitter page: @Parky Players

Thanks to Arts Council England Funding, we've written and rehearsed a new version of this piece of comedy theatre. Our first performances are early 2022.

Please support so we can take it to the Fringe 2022.

Any donations will help us continue this project, building more awareness of the condition. Thank you! xx

A group of Nottingham based thespians who all happen to all be diagnosed with Parkinson’s Disease are creating a brand new piece of comedy theatre loosely based on the story of Snow White and The Seven Dwarfs, but with added ecology, neurology and laughs for all the family.

Parkinson’s activists and fundraisers including Sheila North, Janet Barnes, Peter Harrison and friends have not been deterred by neither the Covid-19 crisis nor their condition, but instead have been meeting online creating this brand new theatrical piece.

The team are hoping to raise awareness of a condition that can affect people of all ages. The aim is to do this in a fun way, whereby friends, family and the community can get involved.

The team’s initial plan was to have the production ready for performance Spring 2021. Due to COVID-19 they are now looking to record it as a radio performance and publish as a podcast.

Sheila and the team have spent many hours so far creating this unique piece and are now appealing to individuals and any local businesses to get involved through sponsorship to help put the performance together and ultimately raise awareness of a condition that is close to their hearts.

“We hope to raise awareness of the condition in a fun and positive way. The play is packed full of topical references and gags, and takes a humorous view point on what is a pretty rotten disease”. The show is for everyone, whether you’ve got connections to PD or not.”

Parkinson’s UK estimate that there are more than 40 symptoms of the condition. As well as the most widely known symptom - tremor - these range from physical symptoms like muscle stiffness to depression, anxiety, hallucinations, memory problems and dementia, but Parkinson’s affects everyone differently.

Person with PD, activist, fundraiser, and now a bit of an actor :-)