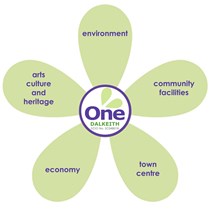 James Martin Stagg CB OBE FRSE is Dalkeith's unsung hero, his contribution towards the allied war effort was of such magnitude that his efforts, expertise and determination could be considered key factors in bringing an end to World War 2 and saving the lives of some 60,000 individuals. Despite this, the story of Group Captain James Stagg remains relatively unknown in my home town so to commemorate his life and achievements I am raising funds for a plaque to be positioned in his honour in the vicinity building where his house once stood in Dalkeith High St.

The following is a brief summary of the life of this remarkable man.

In a long and distinguished career, the RAF's Group Captain James Martin Stagg was, amongst other achievements, the Chief Meteorological Adviser to Allied Forces, Europe, 1943-45. Stagg played a key role in predicting the weather conditions for the D-Day landings in early June 1944. It was largely thanks to Stagg’s work and intuition that he convinced General Eisenhower to postpone the landings for 24 hours because of a severe storm. This was a critical and extremely difficult decision, and without it the landings would have been much more difficult and may not have been successful. This in turn means that the course of the Second World War would have been entirely different.

Educated at the old Dalkeith High School, Stagg won certificates for perfect attendance in 1907, 1908 and 1911. In 1914-15 at the end of his third Higher Grade year (age 15), he was Dux of the school. At this time Dalkeith High School did not provide education beyond the age of 15 so Stagg had to complete his schooling at Broughton Junior Student Centre in Edinburgh. In July 1917, he won a bursary to attend Edinburgh University. He graduated with first class honours in Mathematics and Natural Philosophy (Physics) in July 1920. The following years he graduated with a Diploma in Education. He was science master at George Heriot’s School, Edinburgh between 1921 and 1923, and then took up a post with the Meteorological Office.

In 1932, he was leader of the British Polar Expedition to Arctic Canada, reports of which appeared in the Dalkeith Advertiser.

Stagg died on 23 June 1975 at his home in Seaford, East Sussex, his body was cremated and his remains were later interred at the family lair (T100) in Dalkeith New Cemetery.